The Avengers: The Thirteenth Hole 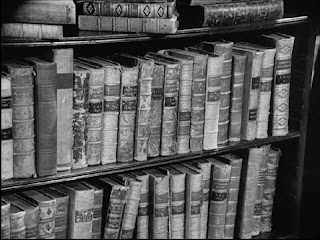 It's been a while since I've posted on The Avengers & since I've got a man in taking apart my sideboard with a crowbar & taking away all the rubbish I don't want, I might as well post on this vintage episode. And vintage it really is. My introduction to The Avengers was the Tara King series & the colour Mrs Peel episodes, so I have a weakness for them, but whenever I return to series 4 I have to admit I can see why it's often thought the best.
I think probably the Avengers 'recipe' is at its best in these episodes. The episode is populated with a cast of characters who are overdrawn to exactly the right degree: they wouldn't seem real in the real world but aren't overdone. Steed is at his best playing his upper class buffoon role at the golf club. The scene immediately after the opening scenes, of the stocking-clad figure searching an agent's apartment, place this in the category of corruption in the Establishment. The visual language of traditional, solid, furniture & leather-bound books, are what indicate this in the language of The Avengers.
Incidentally some of the books in the bookcase, pictured just before they're overturned, look very much like volumes from Steed's library to me. That screenshot is the closest I've ever got to seeing the titles: it kills me that I can't quite read it. I realise this little obsession of mine is taking over my life & I should probably seek treatment for it. Clearly the intention is for the viewer merely to see generic leather-bound books, but I suppose I'm just not built that way. When I found them cropping up in ITC series as well (click the 'Steed's library' label on the web version of this blog to see all the places I've spotted them), but not so far in a BBC show, my curiosity was too piqued not to chase the rabbit.
My interest is also piqued by the gender roles in this Avengers. I've never noticed before that Mrs Peel is literally the only woman in the cast: admittedly it is set in the traditionally all-male environs of a golf club. I love the black & white furry outfit in which Mrs Peel turns up to play golf. It once again inverts the corruption-in-the-establishment motif by making Mrs Peel - representative of modernity & breaking convention - a major figure in ridding the episode's setting of the evil, thus suggesting that modernity props up & can be used to save, conservatism. Also in the scene where she disturbs the intruder in the flat, she gets an opportunity to fight him (surely to be on the receiving end of that beating would have been the fantasy of many a man in the 1960s!), but she doesn't win. Despite monumental intelligence & physical prowess she succumbs to the trick of being enclosed in a chair frame, relegating her almost to the role of 'the little woman'. I would read it that in this male-dominated episode she couldn't be allowed to win.
In fact that scene also creates the one thing that is monumentally wrong (to my mind) with this episode. Not only is Mrs Peel's first fight scene placed way too early, & her losing it apparently puts her in a subordinate position, but Steed's appearance is timed exactly wrongly. The stockinged-headed figure runs through the door, neatly closing it behind him, Mrs Peel extricates herself from the chair & runs to open the door, only to find Steed on the other side, who shows no sign of rush. He *should* have at least seen the intruder running away. This really is an incredible blunder, which could easily have been solved by having Mrs Peel chase the intruder & come back a little later to find Steed already in the flat. On the other hand, if you feel I'm making too much of this, it could be interpreted as an aspect of the unreality of The Avengers - the timing is almost slapstick, & may contribute also to the magical omniscience technique used so much in The Avengers.
Apart from that my only gripe would be with the large number of repeat Avengers faces (http://theavengers.tv/forever/peel1-18.htm lists no fewer than five actors), which tends to leave you wondering who people are. It took me a while to realise that Collins is Francis Matthews, who played Paul Temple in the series I recently reviewed. I don't really buy the criticisms I have read on the internet that this one's plot is ridiculously full of holes & patchy. It is saved by the excellent visuals. Some familiar locations are used which give the authentic Avengerland feeling. But for someone who would rather pull out my own fingernails than play golf I find the setting of a golf course unexpectedly atmospheric.
I'm not sure it's worthy of my Stonking Good Television category, but this is classic Avengers.
------------------
60s jobbing actors 60s TV Steed's Library The Avengers