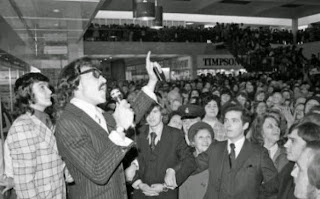 Image: Female fans being held back from Peter Wyngarde as he opens the Woolworths shop in Luton in 1973 (credit: http://m.lutontoday.co.uk/news/nostalgia/when-tv-star-peter-wyngarde-aka-jason-king-opened-luton-s-woolies-store-1-5552393)
Things have been a bit fraught recently, but I've now started a much-needed week of annual leave, & intend to prove my superficiality by starting with a post on the confection that is Jason King, rather than any more serious cult TV show. I'm sure I wrote in my general post about this show that my interest in this show was partly aroused by my godmother telling me - some shamefacedly - that she had a raging crush on Peter Wyngarde in the 1970s. And how much of the 1970s Jason King is!
I have to give it full marks for the tropical establishing shots in the opening scenes. I have read criticism that this stock footage has not worn as well as the film used for the actual series, but my recollection of seventies TV's use of stock footage was that little effort was made to hide the different colour register & film. This was the time before CGI! The seventies were also an incredibly troubled time in all sorts of ways. I only recently realised that I keep candles in the house in case of power cuts, & that this is an expectation I developed as a result of many candlelit hours in my childhood, even though I can't remember a major power cut here for over thirty years & younger people don't seem to keep candles in that way. Anyway, the troubled elements of the 1970s are brought firmly into focus in this show by the sight of a journalist imprisoned unjustly: there is the suggestion of torture in the flashing light & the warder's cane.
Into the middle of this strides Jason King, looking about as unreal as you could wish for. I love the way the torture for King consists of tearing up pieces of his wardrobe. The title of this episode also comes across as unreal. The apparent criminal conspiracy with its emphasis on flamingoes is bizarre. In my real/unreal television divide, we've long left Kansas behind.
On the other hand there remains a very real sense in which the brutal reality of the 1970s - in this case a revolution on a Caribbean island - is knit together with the unreality of Jason King, with the added unreality of Mark Cain, his fictional creator. It is precisely this mixture I like about Jason King - he meanders through a world of revolutions & car bombs, wearing a caftan & having champagne & strawberries for breakfast. It is obviously not to everybody's taste, but I like this outlandish combination enormously.
Of course King's allocated minder has to be a woman, giving him full opportunity to display his misogyny, even mentioning rape as a means of 'persuasion' for a woman at one point. King really is an odious character in so many ways.
On the other hand, given some of the troubled relationships between black & white people at the time (I'm specifically thinking of the then Rhodesia under Ian Smith & the apartheid regime in South Africa) relations are unstrained & natural here. For the time these easy relations strike me as surprising for a British TV series - my impression is that you'd be more likely to find them in a contemporary US show. It gives a positive impression of the black people shown - none of the derogatory references to Vodou or superstition that you find in The Champions, yet this portrait itself also manages to be unreal, with a complete lack of poverty. This Caribbean island looks & feels like a first world country of the time transported elsewhere. It's strange.
Of course the sketchy scene setting is explained by this episode as a vehicle for King's detective ability, pure & simple. Well, & also to allow his colourful personality to lift a rather pedestrian plot into a world of fantasy. Pedestrian plot elements include a mysterious release from prison & the sudden appearance of a CIA man. I feel that given the base elements of the plot here, Mission Impossible or The Man From UNCLE would have done it much better as a spy/action/adventure show, but Jason King takes it into unique territory. Another wonder, of course, is the ease with which King walks into this volatile situation & sorts it. In reality, at the point at which the police chief is thinking of deporting him, you'd really be begging to be put on the next flight back to London.
All in all, I like this episode enormously. The only thing stopping it being stonking good television is the corny script, with huge credibility gaps. This is perhaps one of the shows that is best not looked at too closely, since these faults would otherwise be overshadowed by the larger-than-life character of Jason King.
------------------
70s TV ITC Jason King Petunia Winegum