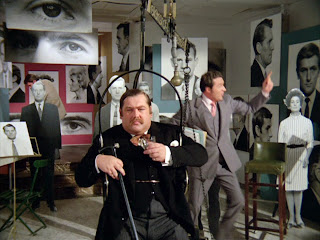 I'm presently suffering from another episode of the depression that has plagued me for the past few years. This time not only am I on fluoxetine (Prozac), which I'm liking better than the antidepressant I've been on before, but I'm trying to work through it. I have, however, hit the point at which you suddenly feel much worse before you feel better so have given myself a duvet day. I get very blokey, irritable depression, & my normal renowned forbearance goes out of the window - not the time to be facing the workplace. I'm interested that I've fallen on The Avengers as duvet television - in my real/unreal dichotomy unreal is definitely better for comfort, I've always loved the Tara King season, & this is one of my favourites.
I say unreal, but I think this episode is only unreal so far as the Avengers characters go - certainly introducing Mother's nephew who is forbidden to call Mother Uncle at work is a genius touch - & the plot is actually worthy of a classic thriller in Agatha Christie or Ngaio Marsh vein. The hotel is of course a staple of the genre as a setting for the group of people who may include a murderer - here changed to be the setting of imprisonment in an apparently ordinary hotel. The apparent ally who turns out to be an enemy is also a staple of the genre.
The programme is not without characteristic Avengers touches. In The Avengers' visual language, it presents an interesting contrast between the modern (the firm for which Tara's uncle works) & the apparently traditional (The Elizabethan Hotel). The fact that the rot has set in at the hotel makes this an Avengers where the enemy is posited as the Establishment gone bad. I see that that would probably chime better with the idea that this show is a send-up of The Prisoner, than the cosy golden age mystery approach I'm taking.
A further Avengers touch is tha apart from the relatively serious subject matter, this one is a lot of fun all the way. It is almost slapstick in the attempts to keep the 'prisoners' imprisoned, & in the prisoners' acts to bring down the facade of a regular hotel at the end.
Visually it's superb. The hotel set is spot on for the British cosy murder milieu. The set for Mother's office, with its cardboard cutouts of suspects, is so visually effective it will stay with the viewer long-term.
It is probably one of the highest accolades I personally can pay a TV programme that even with repeated viewings, at no point have I ever thought there was anything wrong with this. Of course you could pick holes in the plot if you wanted to, but it hangs together remarkably well. My only criticism would be the incredible number of Avengers regulars who can be distracting.
------------------
60s jobbing actors 60s TV The Avengers