The Avengers: The Outside-In Man 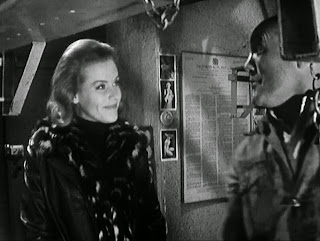 More duvet TV, this time going back to Mrs Gale, & with a version of The Avengers that fits more into the 'real' end of my real/unreal TV spectrum. Only two days ago I posted that I didn't have a favourite Avengers girl - well today I'm prepared to scrub that & declare myself for Mrs Gale.
Here's the thing about Mrs Gale - for the time, when people didn't wear leather in the way you can now, it was incredibly sexy. She was going around in fetish gear, well before Mrs Peel was dressed up in A Touch of Brimstone. The show must have been incredibly racy for 1964 - the implication that Steed & Mrs Gale are sleeping together is very clearly there, read with post-sexual revolution eyes. Also the raciness has hit me afresh coming from Tara King-era Avengers - although the only topless women that could be shown on TV are on the wall of the garage.
This is a true precursor of the eccentricity of the later Avengers - I love that Steed's boss works in a butcher's as a cover, a cover worthy of Mother's offices in the final series. The interiors speak the true Avengers language - here PANSAC is the embodiment of tradition. The relentlessly modern, split-level sets of both Steed's apartment & Mrs Rayner's cottage are the kind of 1960s interior designer fantasies that few can actually have lived in. Charters ironically is another embodiment of Tradition, by virtue of belonging to a gentlemen's club, while Steed is the embodiment of modernity. So this Avengers is actually setting Steed's modern grasp of things over Charters's obsessional resolve to follow orders he received years before.
The plot is a straightforward spy-fi au base. I can't criticise it at all. It is decorated - I can't think of a better word - by Avengers touches such as the familiarity Mrs Gale feels with Steed's apartment & his insistence on reading a Tintin book over answering the phone!
These older Avengers *feel* very different to the later ones, more like a more orthodox television play. Visually, however, it remains superb. Butchers, garage, city apartment, it spells sophistication & city living. I can only make my customary complaint of there being too many familiar faces. It is also slightly obvious that there must be a plot twist because of Steed's extraordinary behaviour.
Ultimately, though, this Avengers is a vehicle for Mrs Gale. She gets the majority of scenes requiring any depth of emotion or understanding. Her comment that she does know what it is to be made a widow is particularly effective. In fact, on a deeper level this episode covers the same kind of ground covered by later episodes of Danger Man: how far do you go for your job, country, values? How far do you compromise for the ultimate end? What does it mean to 'bury the hatchet' & is that a viable option? Do we identify with the state, our own views or a campaign?
All in all an excellent early Avengers episode, which manages to hit with its sexiness while also having a deeper meaning under the surface.
------------------
60s jobbing actors 60s TV The Avengers