Allegory in The Prisoner: Do Not Forsake Me Oh My Darling 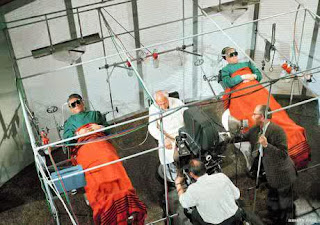 Right. This is where I really get to go to town on my own theories with allegory in The Prisoner. Of course this is the odd episode out. Of course McGoohan is barely seen, & the wole episode isn't very 'McGoohan' at all. The majority of the episode even takes place outside of The Village. These are all the things that make this episode...I can only use the phrase 'stand out' from the rest, & it is the aspects that make people dislike this episode that must be grasped onto for the meaning here.
The episode opens with a unique opener of men looking at transparencies. Much is made of slide Number 6. I'm not going to labour the wholly obvious point there. The presence of the great & the good & photography introduce the allegorical themes of this episode. It is about intelligence/technology (I suppose what we would now call information technology), & it is about power.
The key intelligence here is the knowledge Selzmann has developed of transferring the psyche from one person to another. The main power play here is that the great & the good are desperate to get the intelligence, & the power that would go with it.
But the nub of that is that the unconsidered discoverer of this intelligence trumps the powerful to win at the end. In a true allegorical way, this story warns against the misuse of power. It is like the hare & the tortoise.
The fact that Number 6 is not 'himself' for much of the episode merely recalls the process in Schizoid Man where Number 6 becomes 'whole' by becoming Number 12. It makes this episode truly the odd one out, but Number 6 is apparently a 'Village man' here. He has actually arrived at what he could be in The Village.
Similarly the fact that the action of the episode deliberately takes place outside The Village reinforces the importance of The Village to the series, the authorities, & Number 6 himself. Remember my personal theory that The Village represents Number 6's dream escape from his workaday life as a secret agent, but one he is at best ambivalent or sometimes doesn't want at all? In this episode his ambivalence swings, causing the other side of his dream world to come to life. He leaves The Village, his supposed dream, to do a work of national importance. His dream escape, which he has himself created & is a reflection of all his own foibles & faults, gives way to the reality. He doesn't really want his dream - it is too painful because it is his own. It is with this episode that I feel the allegory of Village-as-Number-6's-Dream fits better than Village-as-allegory-for-society. The latter view falls down here because of the journey out from the Village, whereas this episode can be explained in the terms of my own theory. Having sung the praises of my theory, I'd have to say I'm not at all sure what I'll do when I get to Living in Harmony!
------------------
60s TV Allegory in The Prisoner ITC The Prisoner