Allegory in The Prisoner: Dance of the Dead 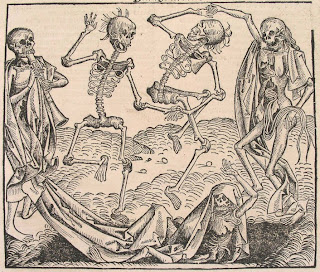 Picture credit: http://twistedpurplecow.blogspot.com/2011/02/plague-death-came-within-hours-spurred.html?m=1
You wouldn't believe the trouble this episode's giving me. I normally like at least to cast a glance around what other people on tinternet are saying when I write a post, if only to clarify what I'm thinking myself, but this episode of all others seems to have attracted so much commentary it's impossible to absorb. I'm therefore reduced to my own jaundiced view.
In fact this one ought to be perfectly simple to write about from an allegorical point of view, since in many ways it has the most obvious allegorical content of death & life. Even its title is inspired by a famous mediaeval allegory:
'dance of death, also called danse macabre,  medieval allegorical concept of the all-conquering and equalizing power of death, expressed in the drama, poetry, music, and visual arts of western Europe mainly in the late Middle Ages. Strictly speaking, it is a literary or pictorial representation of a procession or dance of both living and dead figures, the living arranged in order of their rank, from pope and emperor to child, clerk, and hermit, and the dead leading them to the grave. The dance of death had its origins in late 13th- or early 14th-century poems that combined the essential ideas of the inevitability and the impartiality of death. The concept probably gained momentum in the late Middle Ages as a result of the obsession with death inspired by an epidemic of the Black Death in the mid-14th century and the devastation of the Hundred Years' War (1337–1453) between France and England. The mime dance and the morality play undoubtedly contributed to the development of its form.' (http://www.britannica.com/EBchecked/topic/154473/dance-of-death)
The allegorical use of the idea here is a little too obvious for my case, so obvious in fact, that knowing McGoohan it arouses my suspicion. The allegory seems to be both that Number 6 can only live through the Village, the message expressed so often elsewhere in the series, & yet also it seems that the joke is on the dancers in the carnival. The whole point is that actually they are dead already. The point of the extermination order is the fact that only death will truly come through The Village. The significance of the telex machine coming back to life would be that life comes from the outside world, in this reading, the final reinforcement of the allegory of the radio.
Apart from this whacking great allegory there are a number of other things in the episode that interest me from an allegorical point of view. I'm having difficulty working all of these threads into a coherent theory which would encompass the whole episode, so this post will mainly consist of some thoughts about different things.
Dutton, for one. Dutton has a name. Dutton, Dutton, Dutton, Dutton. We know the character's name & can say it. He is the only character in The Village whose name we know. He is ordered for extermination in this episode. I wonder whether there's a connection between the name & death, here? Number 6 is always the great rebel in The Village, yet we never get to know his name. It isn't even as if Number 6 has no external identity: his fancy dress is his suit from the outside, while Dutton is dressed in Village stripes (at the start of the episode). I would theorise that Dutton's identity is given to indicate that his external status equates to death. The Village functions almost like a cult here, so that the only way to life is through the Village. The repeated stress that Number 6 is valuable & not to be destroyed both allows him a Village identity & is at odds with his projected destruction in this episode.
I want to know what the number is of the cat. That would be a very interesting thing to work out.
I like the rather playground way Number 6's observer says to him:
'You're not allowed animals, it's a rule.'
In fact the childish element here is the other thing that really piques my interest. It's a game, she says of the carnival, before Number 6 is hounded by the crowd after a kangaroo court. The sense of irresponsibility & childishness is first seen in the doctor's wrecklessly experimenting on Number 6. But it reaches its height in the fact that Number 2 has Peter Pan as her fancy dress costume. She evokes the theatrical tradition of cross-dressing, in a more gender-oriented reading of this episode, but from an allegorical point of view the message is clear: she represents the person who will not grow up.
Since I'm having difficulty uniting all these strands, what's the betting I'll return to Dance of the Dead at some point?
------------------
60s TV Allegory in The Prisoner ITC The Prisoner