The Avengers: My Take on the Springbok Radio Shows and Other Steed Actors 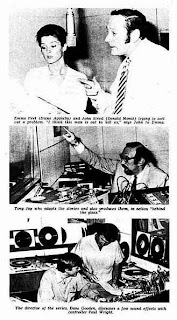 Image credit: http://aor.theavengers.tv/background_bulletin_orig.htm
I was reading a blog post the other day (http://suddenlyashotrangout.wordpress.com/2014/07/13/the-avengers-lost-episodes/) by someone who also didn't like Big Finish's releases of the lost Avengers episodes, for some of the same reasons as me, & interestingly because it takes the show out of its native 1960s milieu, but predominantly because of the lack of Patrick Macnee & Ian Hendry. She seemed to feel that the only person who could play Steed is Patrick McNee, a view I have heard often stated. In fact I must be the odd one out because I don't feel Macnee is the only possible Steed. I'm *way* too young to have seen the short-lived stage play, but I have come across three other depictions of Steed, in fact I usually have at least some of the radio shows on my mp3 player.
The radio show ran on Springbok Radio in South Africa on weekday evenings in a fifteen-minute slot from 1971 to 1973. It appeared that they had vanished completely, despite also being broadcast in New Zealand, Australia, & the USA - another victim of the anti-archival mentality of the times (http://aor.theavengers.tv/series_in_detail_06.htm). The existing serials that survive today were recorded on reel-to-reel tapes by a radio fan called John Wright: apart from some copies of his tapes, they are the only sources for the remaining known serials. I downloaded the episodes from the Avengers Declassified, & am sorry to see that 'These serials are not currently available from The Avengers Declassified, but if you drop us a line and ask nicely, we'll see what can be done!' (http://declassified.theavengers.tv/radio_archive.htm)
The remaining series are many of them Tara King shows rewritten for Mrs Peel. I like them a lot. I certainly don't object to Donald Monat as Steed. They also have an advantage over Big Finish's releases, in that they have a narrator, so at least *work* without visuals.
Other than the radio series there are two depictions of Steed I have seen, & I object to neither of them. Simon Williams played Steed in a spoof of The Avengers by Lily Savage (http://www.new-gallery-of-art.com/goodies_serendipity.htm). I think he actually does a very good job of over-doing Steed somewhat; I certainly don't find his depiction objectionable. I even don't object to Ralph Fiennes's depiction in the much-maligned Avengers film, which I like a lot. I saw it five times when it came out: three in Oxford & two in Birmingham. Oddly the two places seemed to produce a different crowd - the Oxford crowd thought it a jolly jape & laughed uproariously. The Birmingham crowd, though, were obviously die-hard Avengers fans like me, who took the revival of their favourite series with the correct degree of seriousness. One of these days I'm going to post on the film, including all the references to the original series I can identify.
------------------
60s TV The Avengers