Doctor Who: The Talons of Weng-Chiang, Episode 6 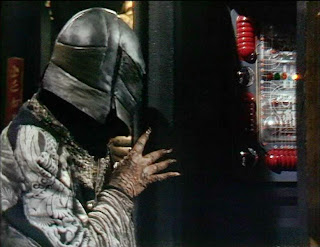 To be frank, I found this episode a fairly standard resolution of the problem posed, at least to start off with - bargaining is not reserved for ordinary mortals, then. Perhaps it's also just me or a result of repeatedly watching episodes (although I've tried to get them suitably separated in time to achieve the correct seventies TV impression) but I also found the opening confusing, since it seemed very similar to the openings of other episodes.
The Doctor is at his most infuriating - I love the random selection of stuff from his pockets - & I love his teasing with tales of his activities in the future tense.
I've just realised what I don't like about this adventure. Plot-wise this episode is a fairly straightforward one in many ways, with elements of negotiation, bargaining, plotting, deception, & so on. However, planted on top of that is the fantastic story of Magnus Greel, & his little problem with his time cabinet. This is otherwise a completely nineteenth-century-milieu story. One of these things has to go - either make the plot more bizarre, get rid of the bizarre characters, or move it out of its setting.
Perhaps it's me. I notice that I'll tend to have a 'thing' for a series & watch (& therefore write about here) a lot of that series for a bit. I had a Doctor Who fad a few years ago & suspect I'm not ready for another fad. On the other hand I seem to have watched quite a lot of Doctor Who, as witnessed by this blog, but was probably most impressed by the terminally unpopular films. The jury's out on that one.
As far as Weng-Chiang goes, I've made up my mind that there's something terminally unsatisfying about it, or perhaps a combination of the aspects I've decided I dislike. It's a pity - from everyone other than me it gets rave reviews, & its gaslight milieu held out such promise.
------------------