Doctor Who: The Talons of Weng Chiang, Episode 4 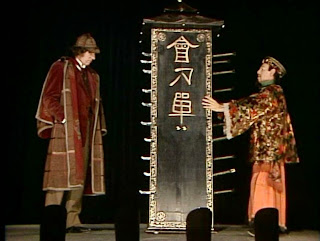 Since my last blog post I've been continuing to watch The Prisoner & thinking about allegory. I've also been watching Minder. I'm not minded to blog about it. I think this may be because it is *so* seventies - the trousers are stay-prest, the shirts are nylon, the interiors are revolting, the chest hair is luxuriant, & I glimpsed a medallion or two - all of this is painful because I remember the seventies & think those years can only be looked back on favourably by those who don't remember them. Now the seventies looking back at the sixties are a different matter. Another different matter is Doctor Who, & even though this one was broadcast in the seventies, it always had the good sense to be not-too-seventies, even when contemporary.
Of course the whole point of Doctor Who is the unusual approach to time. In this case I find I keep thinking of the Series 6 Avengers episode, Fog, which is set in a very sixties reconstruction of the London of Jack the Ripper. Here the inspiration is obviously Sherlock Holmes, but while this is a more accurate Victorian reconstruction, it also messes with time in a much more radical way. That happens at the moment Tom Baker starts talking about the molecular structure of the Chinese box, to my mind.
So the approach to time in this Who adventure is an interesting one: the other really strange thing from a completely personal point of view is that is also extremely seventies, but not in a Minder sort of way. I don't mean that Who is walking round in flares, but I found previously that it made me think of Sapphire & Steel, for me one of the archetypally seventies shows. The music hall scenes make me think of a seventies show that my mother used to sit my grandmother in front of, which was a reconstruction of Victorian music hall acts - I'm afraid I've forgotten its name. So while this show is a not-bad Victorian scene, it is also firmly seventies (to me), with the Doctor wandering in to send the time all anyhow. This is not a complaint, it is a statement of the inspirations I personally detect here.
A further inspiration is clearly the classic music hall tradition - the vanishing cabinet scene gives a real sense of how terrifying it could be. Perhaps it is because it is the villain in a Doctor Who with the swords. Visually you can't really go wrong with that act. It is rightly against a black background so that the colours of the Doctor's & Chang's clothes appear stark against the background. In fact the whole episode is visually superb, it is exactly right to give the feeling of brooding doom. In fact I had been thinking that I may not continue blogging about this series, but it was this episode that made me wake up & pay attention. 'Theatre' in all its aspects is the real subject of it - about pretence, appearances, escape from reality, & deceit.
Of course it was a mistake to show the rat, how could it be anything else? It looks like a teddy bear eating Chang. And of course I would just repeat my previous objections about the images of Chinese people & that creepy dolls can only really be done by Agatha Christie. But on the whole an excellent Who that really made me pay attention when I was losing interest.
------------------