Allegory in The Prisoner: Introduction 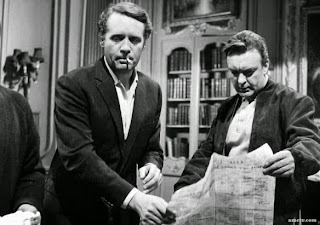 I must once again give a mention to Mitchell at itsabouttv.com, who once again mentions this blog this week. Obviously the reason he mentions it every week is he is a man of discernment, & I do like to think, self-deprecatingly that mine is one of the *better* blogs on television. I'm mentioning him also because I'm totally certain that the series of posts I'm starting with this one will grab his attention. That said, it's funny what does attract people on this blog - the posts on Adam Adamant - surely one of the most recherche TV series of all time - are amongst the most popular. Although perhaps because they're little known they are under-commented on elsewhere. The posts on Department S & Randall & Hopkirk don't get many hits at all, which never fails to surprise me. Of the ones I've already done on The Prisoner, Hammer into Anvil gets a disproportionate number of hits in comparison to the others.
Be that as it may, for some time I've been wanting to watch through The Prisoner again - I thought when I did a series of posts trying to read the series through the perspective that Number 6 *is* John Drake, that it would lend itself to multiple series of posts, understanding it from a different perspective each time. This time I want to understand it allegorically, a way of understanding a narrative where one thing represents something different:
'allegory,�a symbolic fictional narrative that conveys a meaning not explicitly set forth in the narrative. Allegory, which encompasses such forms as fable, parable, and apologue, may have meaning on two or more levels that the reader can understand only through an interpretive process. (See also fable, parable, and allegory.)
'Literary allegories typically describe situations and events or express abstract ideas in terms of material objects, persons, and actions. Such early writers as Plato, Cicero, Apuleius, and Augustine made use of allegory, but it became especially popular in sustained narratives in the Middle Ages. Probably the most influential allegory of that period is the 13th-century French didactic poem Roman de la rose (Romance of the Rose). This poem illustrates the allegorical technique of personification, in which a fictional character�in this case, The Lover�transparently represents a concept or a type. As in most allegories, the action of the narrative �stands for� something not explicitly stated. The Lover�s eventual plucking of the crimson rose represents his conquest of his lady.' (http://www.britannica.com/EBchecked/topic/16078/allegory)
Perhaps among the best-known examples are found in the Bible, where many of Jesus's teachings can be understood in a completely different way, or is even seen in Joseph interpreting pharaoh's dream. This is the point at which I show off that I have a completely unexpected degree in theology, & the Hebrew actually talks of Joseph's coat with long sleeves: no mention of multicoloured or dreams!
I must confess I'm nervous about doing this publicly: allegory is a nightmare at the best of times, & in The Prisoner, where the waters have been muddied so often, even more so. So what I'm going to do is this: I'm going to watch the episodes and let my mind wander to where it will. I'm expecting that some seriously weird stuff will come out of my twisted mind. I'll also look on tinternet to see what other people see represented allegorically in The Prisoner. I will probably be tempted to call them sick & twisted. Hopefully they won't come round with an axe & kill me. I know discussion of The Prisoner can get heated!
I'm tempted to start with the obvious: that Number 6's life in The Village is aimed at his eventual discovery of himself, & that that is the end to which all the Prisoner allegory tends. I shall try to avoid solely reading it like that, but that idea will no doubt colour my interpretation of the allegory. Actually I'm watching Arrival as I write this, & I'm going to start with a Prisoner heresy. But that will come in my next post.
------------------
60s TV Allegory in The Prisoner ITC The Prisoner