The New Avengers: To Catch A Rat 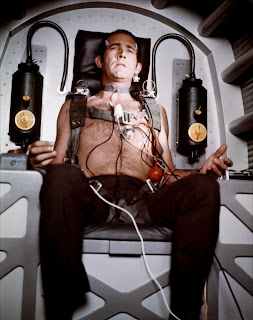 This is one of the few appearances Ian Hendry, the protagonist of series 1 of The Avengers, will make a welcome appearance on this blog. In fact, I'm delighted to have found such a silly photo of him online, that no amount of screen caps could make up for missing that photo. The problem with this episode is, I so want to like this New Avengers,  it starts so atmospherically & the basic premise of its plot is so good.
The things I like a lot: you can't go wrong with a circus scene, of *course* Steed's code name of the new doberman is abbreviated to 'the new d', the Avengers-style titles Purdey gives to Gambit's amorous adventures, & the scene in the church contrasted with the seventies technology. What I like absolutely best about this episode is how seventies it is - the technology, clothes & interiors are all absolutely perfect. The Cold War touches of the opening scenes place this episode firmly in the past for us now, so it is only right that it should be dated, rather than attempting at timelessness. On the surface it is very much a standard Cold War espionage story, given some very Avengers touches. In this feeling I have - that it does have the distinctive Avengers feel - I'm probably alone in the whole internet.
There are just a few things wrong with this one. Unfortunately the major thing that is wrong with it is  commented on in every online review of this episode I've found - I've just read four in quick succession, & every review says that this episode works because it has Ian Hendry in it. Or else, this episode marks the welcome return to The Avengers of Ian Hendry. Or, Ian Hendry saves this episode. This is exactly the problem with returning actors that I go on & on about - they obscure the actual show from view, if they are well-known, & in this case hide the fact that the plot line is pedestrian, & this episode crawls along like a very elderly, debilitated snail. The main reason people watch this episode is to see Ian Hendry - the majority of his television work was ephemeral so it really is difficult to find a recording of him. He even manages to prevent most reviewers commenting that Purdey is about as minx-ish & seductive as she gets in this episode!
I was hoping to find some scurrilous gossip about Hendry - if I can't find a great deal to say about a TV programme I'm not above commenting on some eccentricity of the actors. There's not really that much to find out about Hendry - he is rumoured to have drunk, but that wasn't that unusual at the time. There is one point in this show where he acts to me like an alcoholic does. I find it interesting that the cause of his death wasn't disclosed, although something along the lines of throat cancer was rumoured. His early attraction to the circus is well known, I've commented on it before in this blog. I think probably what I find most interesting is that in his lifetime it was possible for a public figure not to be a celebrity in the way they would be now. Of course he gave a 'tell-all' interview to the press after he was declared bankrupt - that, followed by a record year of work, meant he was soon discharged as a bankrupt. The acting profession is such an insecure one, & seems to attract people with psychological weaknesses, or else people who manage their stress in some fairly dysfunctional ways, going off the rails in the process.
My favourite line:
'I came with the deliberate intention...'
'...of having your back broken in three places.'
------------------
60s jobbing actors 70s TV The New Avengers