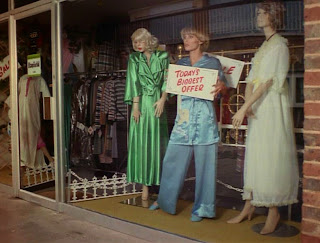 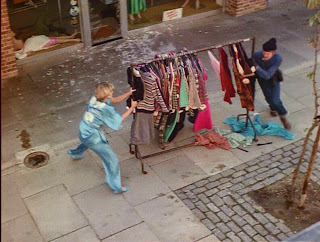 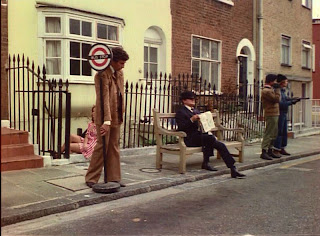 It is becoming apparent to me that some New Avengers are more classic Avengers than others. To Catch A Rat was on the less Avengers end of the scale - it would be difficult to think of anything more inspired by the original Avengers than this one. It's got everything - London cityscapes, deadly chemicals, empty cities, diabolical masterminds, terrible innuendo, a woman fighting, you name it. Episodes referenced would be The Hour That Never Was, & The Morning After.
An Avengers theme that is revisited here yet is not often commented on is the ambivalence towards yet idolisation of 'science' & 'scientists' - both undifferentiated from any other scientists yet also frequently the route by which things go wrong, a view I commented on in my posts on the cybernauts Avengers episodes. Here the chemical that causes the sleep, called S95, is posited as a wonderful weapon yet is misused within a matter of hours. In Sleepers, technology is seen as something to be controlled - presumably by the right people, & that would mean presumably us. Gambit doesn't mind having a flat that's bang up to the minute, so the ambivalence towards technology doesn't extend that far.
I find the development to Gambit's character interesting here. His tale that he isn't into pyjamas himself but he has an aunt who thinks he ought to be & who gives him a pair every birthday, is so classically Steed. It reinforces my impression that Gambit is essentially the character that Steed originally was. This is further reinforced by Gambit's loucheness, an echo of the earlier Steed who can still be seen in the monochrome Mrs Peel series. Some of his innuendos are single- not double-entendre, definitely reflected in Gambit's character here. Gambit comments to Steed that his flat isn't palatial - while clearly being a bachelor pad, it is also very much up-to-the-minute in decor & appliances. It would clearly have been way beyond the means of most people in the 1970s, although in retrospect I'm sure Steed couldn't sleep in the spare room because of the decor, not because of his worry (for a full description of Gambit's & Purdey's flats, see http://luxhedera.livejournal.com/54997.html). Purdey remains the sex object - she simply has to get locked out of her flat in her pyjamas - surely the ultimate fantasy of many a man in the 1970s! There was a scene cut out from this episode in which Purdey speaks Spanish (see http://absolutelyjoannalumley.freeforums.org/lost-scene-sleeper-t680.html): I've been unable to find why it was cut out, but intentional or not, the effect is to reduce the occasions on which Purdey would have been seen as anything more than sex kitten & high-kicking fighting machine.
Steed is plainly not feeling himself this week - my take on his approach to Gambit is that he is inviting himself to stay the night - this is unSteed enough. I'm not convinced by Alex Wilcock's reading of a sexual dynamic into this sequence:
'And if you think that element of sexuality�s a bit off [Purdey running round in pyjamas], this is also the episode where you can catch a bizarre level of homoeroticism among men who you really wouldn�t want to. Not only does Steed inviting himself for a nightcap at Gambit�s flat frequently seem like he�s trying to chat Gambit up, but the villain�s apparently chatted up by Dr Graham early on, too (and do note that, while he and his group of hilariously over-tooled-up machine gun and bazooka-wielding macho thugs have no compunction about murder, he doesn�t kill the doctor to preserve his secret, but merely knocks him out� And throws him a single rose).' (http://loveandliberty.blogspot.com/2009/01/sleeper.html?m=1) I feel that if there were to be an element of homoeroticism it would be between Steed & Frank Hardy, purely based on Steed's frantic concern for him & the family photograph of them together by the phone.
The plot of this show is relatively thin - just be chance the Avengers are the only people for miles around innoculated against the chemical - but Sleeper nonetheless manages to beguile, purely by atmosphere. It is strangely compelling & incredibly successful.
Visually it's splendid, with its strange collection of locations (ell's Hill Shopping Centre, Stoke Poges (Buckinghamshire), the Brunel University in Uxbridge (Middlesex), Southall Water Tower (Middlesex � and last seen in Target!), Hammersmith (West London) and Camden Lock (North London); source - http://declassified.theavengers.tv/tna_172_sleeper.htm) working extraordinarily well together. Not only the visuals are great, but for a show which ought to be quiet, there are two occasions in which a car radio provides an amusing commentary on the action, so even sound-wise this is an effective show.
My absolutely favourite bit: Steed & Gambit moving closer up the bench & freezing whenever observed.
It's a rare accolade, but this New Avengers episode gets into the Stonking Good Television class.
------------------
70s TV The New Avengers