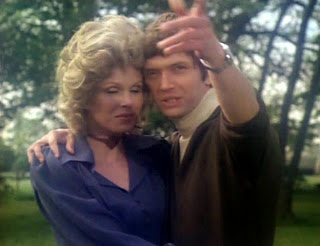 You would think the Avengers' lives would be dangerous enough without attracting obsession as well. My well-documented dislike of familiar actors comes into play here, so let's get it out of the way: I don't understand why Purdey is seeing Doyle out of the Professionals, & calling him Larry. It could provide a fictional background of how Doyle swapped sides after being mad as a box of frogs! Lewis Collins (who played Bodie in The Professionals also appears in this - they're both terrorists. Those who would try to see their casting in The Professionals somehow pre-empted in this episode of The New Avengers (for example in the comment about working together again) should resist the urge. They were not cast together originally on The Professionals, only one was, but his co-star was a friend & didn't have the necessary tension that Collins & Shaw's not-really-getting-on relationship gave.
This episode raises all sorts of questions. How did Purdey go from being a ballet dancer to being a secret agent? Why doesn't she *ever* have a first name, not even on the ballet bill we see? What possessed *anyone* to give her the perm (presumably a wig) that she starts the episode off with?
'Rules before friendship,' says Steed, & Steed remains firmly in solid-as-rock role throughout this one. Actually my feelings have been rather mixed, watching this for the umpteenth time. I was all ready to write a hatchet job on it. In some ways it's all wrong from beginning to end - it's the sheer soppiness in the middle of extreme violence that prevents this show hanging together as a coherent whole. The kind of painful, shall-we-shan't-we, painful relationship that Purdey has with Doomer would not have fitted in to an episode of the original Avengers. That kind of pain is too real for the unreal world of The Avengers.
Yet on consideration I have come to see this episode quite differently - this is exactly why I started this blog, to make me think differently about the TV programmes I watch. I only realised the extent to which this is a (rather flawed) shot at an episode of The Avengers when I realised what wearing a military uniform means in the language of The Avengers. It means either you're a jolly good sort or you're a diabolical mastermind who blows up the Houses of Parliament. The General of course is a jolly good sort - I love the way they literally pour whisky into his mouth to get him to talk, on the basis that pain would not work on him, being a soldier. Obsession actually uses so many Avengers tropes. Even the scene where Doomer abducts the General by feigning a breakdown is directly taken from The Curious Case of the Countless Clues.
The twist placed on it here is the point of obsession: Doomer's obsession is his undoing, but Purdey's obsession with scratching the itch he is in effect allows her unintentionally to distract him while Gambit comes close enough to shoot him. Gambit returns to the theme of following the rules - he had to kill Doomer because he had a gun pointed straight at Purdey.
It is at this point the most ridiculous lines ('She's Purdey' 'She's a woman') are spoken by Steed & Gambit. It is a facile summary for the complex and painful emotions she has plainly been experiencing all the way through this piece.
My favourite bit: the bit where Purdey & Doomer are walking out the plan of their dream house in the 1970 prologue.
------------------
70s TV The New Avengers