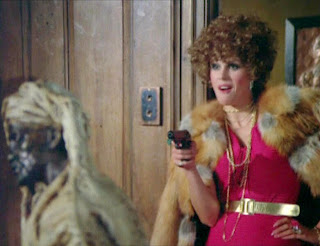 Another New Avengers episode drawing heavily on ideas from one of the previous series, in this case the episode is They Keep Killing Steed, of series 6. Of course changes in appearance & persona are also experimented with in many other Avengers episodes - a summary & review of them may be found at http://theavengers.tv/forever/mvr02.htm.
The first thing to notice is...whoa, get those groovy seventies graphics. I was hoping to discover how/why the opening titles changed for this series 1 episode, only to find it was more complicated than I thought it was:
'This was first episode in production order to feature the new lion logo, animated title sequence and red background end credit 'lion' sequence. The new sequence was later edited on to most prints of the earlier episodes. However, the end credit sequences of these episodes would retain the old dark green logo against a lighter green background despite the substitution. There is a suggestion that all episodes originally went out with the animated sequence, the original one having been replaced with the new one before the first UK transmission, but it has not been possible to definitively confirm this. An even earlier live-action sequence featuring a graffiti style 'New' has also surfaced on some prints in the USA.' (http://declassified.theavengers.tv/tna_169_faces.htm)
I remain uninformed about the technology that would have been used to achieve the effects in the titles in the 1970s. However ii am indebted to the Avengers Declassified website for alerting me to the stunning similarities between this & a Champions episode (http://declassified.theavengers.tv/staytuned_tna_faces_mission.htm), which I hadn't clocked till just now.
There is something ironic in this episode for me - the one glaring thing that let's it down is also the best bit. Gareth Hunt & Joanna Lumley overact incredibly in their roles of bits of rough dragged out of the gutter. Hunt's comedic Irish accent could be excused as deliberate overacting but Lumley's vowels are still too posh. That said, the gusto with which they act these parts can excuse a lot, because they make it so much fun that you ignore the sheer ridiculousness of the plot. In fact impossibility would be more the word, however the gusto again excuses the lightweight plot.
Less lightweight is theme of loss running through the New Avengers - Steed keeps on losing old friends & Purdey keeps losing boyfriends. In this it is somehow a more serious representation of the impact of the Avengers' jobs on their characters than tended to come across in the original Avengers. The point of Steed was his anonymity - it was never clear where he came from & the aunts & upper crust background only developed as the series went on. Gale & Peel were reluctant amateurs & Miss King was the bright-eyed new recruit: I suspect the full human cost of their intelligence work wouldn't have hit her. The only real human impact I can find in the original series as a parallel to that in The New Avengers is the way the loss of his fiancee turned Dr Keel into an Avenger. That bereavement-as-spur-to-life-changing-action motif is rather inverted into The New Avengers, where the characters are professionals who yet have a personal mission to revenge the deaths of their friends, or rather perhaps, whose professional lives impinge on their private worlds to an excessive degree. I would even suspect that in the real world of intelligence the New Avengers would even be taken off many of their cases through being over-involved. This sense of loss running through the series establishes Steed as a much more sombre character than he has been previously - he has become the grand old man who has loved & lost, not in a romantic way though. This is a real development & deepening of Steed's character.
There is just one other thing I love about this episode: reading round on tinternet about this, people comment on the - interplay, flirting, tension - between Gambit & Purdey. What I love is I haven't yet found a single website that doesn't call this 'intercourse'. Of course this is the word that the doctor uses for what he wants them to establish - but it perfectly pushes this episode into Carry On film territory, not cheesily so. In fact the success of this episode lies in its ridiculousness.
My favourite bit: the simple fact that Purdey's character is called Lolita!
------------------