The New Avengers: Angels of Death 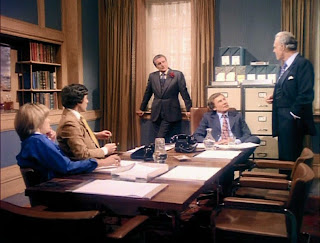 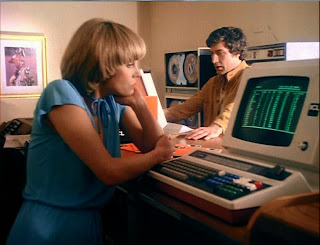 Another episode in which the security of the establishment for which the Avengers work is shown up to be frankly non-existent. I didn't mean to but it seems I've unwittingly started this post by talking about the first major plot hole in this New Avengers episode (namely why nobody thought to keep tabs properly on these fifty agents to realise the pattern in these apparently natural deaths). I hope this doesn't give the impression that I don't like this episode, because I do, in fact I like it lots. This is not that unusual for this episode - lots of people do like it a lot, for all the things I like about it, but it seems a lot of people don't take to it at all. Reading those reviews, they tend not to like it for the very reasons I do!
The first reason would have to be that this one is so *very* seventies. I commented before that the New Avengers, in trying to be up to the minute, in some ways seems more dated than The Avengers, because the latter show aimed at its famous timeless unreality. A make-believe world can't age because it doesn't exist in a set time, but this New Avengers definitely does. One of the things that seems to annoy the critics is the incredibly seventies disco scenes. Personally I love them, I love the hanging foil stuff in the background - this disco is obviously created with minimal expense! I have a feeling at the time these disco scenes would have worked better with the grown ups than the youngsters - the music is plainly generic disco-type music & I think the disco-goers of the actual seventies may not have been impressed. I wonder, though, whether it was intended to have a hypnotic effect on the viewer - each disco scene has exactly the same music, it does become repetitive & hypnotic. The extent of smoking & drinking that goes on in the office is an incredibly alien thing now, though. Angels of Death is one of those New Avengers episodes that showcase the groovy information technology of the seventies - which would surely now be of interest mainly to a real IT anorak.
This show is also meant as a comment on a preoccupation of the seventies - how the pace of modern life inpinges on human health. The irony from this distance in time, is that we may now look back on the seventies as a slower time, well pre-dating the information overload we've all suffered since the internet & instant communication took over everything, for most people from the nineties onwards. The diagram of cells, which first appears as a model used to model stress in a rat, is then revealed to be used to cause stress in humans, triggered by seeing a diagram of the trap they are kept in. Nonetheless, the diagram functions as an emblem of the seventies preoccupation with the rat race & its impact on the human.
This ambivalence about technology is more expressed by Purdey than Gambit - calling the computer a mechanical prig. Purdey & Gambit are like young lovers in that scene - when he asks if she is with him, she says, 'Consider me a body stocking'. In fact it's quite incredible how sexy this show manages to be despite the apparently traumatic subject matter. Not only Gambit & Purdey flirting like nobody's business but the 'nurses' all actually look like porn stars. Their uniforms are a sort of porn-approximation of fantasy nurses. Yet they are actually intent on killing people. Their bimbo role is reinforced by the lengthy explanation of what's happening one of them is treated to in the middle of the episode, when given that fifty men had died through this means, she ought to have been able to suss it. Oh no, perhaps it us who are the bimbos here: the explanation could have been done very shortly & more simply.
That aside, the sexy-yet-vicious overtones give this New Avengers a kinky vibe I personally associate more with The Avengers: I particularly associate this vibe with Castle De'Ath, rather than A Touch of Brimstone, which tries to hard & has the kink all on the surface. Other elements of the visual 'shorthand' used to create the world of the Avengers, which make a reappearance here, include military uniforms & book-lined studies to indicate tradition & solidity. Come to think of it, perhaps the theme of this episode is as much culture clash as anything else, which puts it firmly in the classic Avengers stable, to my mind.
My usual proviso applies here: I kept wondering what Charlie Hungerford was doing in this! I think there is a very valid criticism to be made of the plot, which is a bit plodding & long-drawn-out, but I'm frankly finding it fairly difficult to make major criticism of this New Avengers. I feel this may be with the retro element gained with hindsight - I have no idea how it would have been reviewed at the time. I'm fairly sure that if you don't take to a 1970s milieu, this show would put you off.
So all in all, a solid New Avengers episode, which somehow divides the fans completely.
------------------