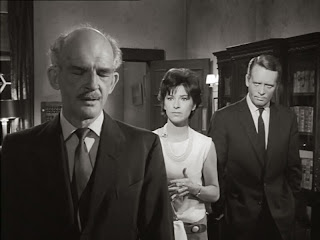 If Don't Nail Him Yet relied heavily on an unspoken subtext of the agent's personal matters coming into play, this one hinges overtly on the workings of institutions - governments & even the spying game. Specifically, it's about what happens when an individual in an organisation is put out to grass for years & what happens when he becomes his own little outpost.
In this episode the tension between Drake & his boss is explicit - he tells him he often overrates his abilities, after asking for a reassurance that a proper team to support him would be in place. This revisits the theme of Drake working in conditions that would lead anyone to get fairly terminally pissed off. It is also evident that Drake isn't the only one in that position - his contact in Beirut describes the difficulty of getting anything she needs, & this is contrasted with sledgehammer subtlety with the resources of the local police. There is a rather obvious moral here - you can only expect agents to go off the rails if you treat them so badly!
Drake gets the chance to be wonderfully urbane in this one, hanging out with the colonial set. Obviously he missed his vocation as an actor! - he really is an expert at adapting his presence to the audience at the time.
This Danger Man has a host of familiar faces - here I'm afraid I find them distracting. From the moment Joan Hickson appeared I was working out where I had heard that voice before. Of course it is a good thing that she was able to come across as a completely different character from Miss Marple, but this was distracting. I appreciate that when this came out, Margaret Rutherford would have been better known for playing Miss Marple, but this is my blog & I'll allow myself an anachronism if I feel like it. Aubrey Morris is of course an actor who appeared in several of the 1960s series that I like, but his presence is subtle enough not to distract me. Anton Rodgers, while a first-class actor, only ever looks like Anton Rodgers. Would the right word for his features be 'aquiline'?
The other major thing I realise only now I don't like about these Danger Man episodes set in exotic locations, is that there is nothing to indicate the location. Buy this I mean that the wholly London-based ones are clearly filmed in London, whereas this episode was obviously completely studio-based. There aren't even any establishing shots from stock footage - a decade later Jason King managed to give a much better impression by means of stock footage. Apart from anything else, what would John Steed's library (pictured in the book case behind Drake) be doing in Beirut?
That said, what I like very much about this is the wonderful evocation of an outpost of Empire. Perhaps this is what this episode does best - the portrait of a closed bureaucratic world which is almost completely self-referential, & exactly the sort of environment where people are overly open to other people's lies about what is actually going on, & get drawn into strange schemes. This small, contained community, where you can't really afford to be ostracised, combined with a lack of interest from above, is a recipe for disaster. I also like the depiction of the paraphernalia associated with spying at the time, some of it now appearing terribly old-fashioned, such as the copying machine.
In conclusion, if this story were intended to set up the correct circumstances for the events of The Prisoner, I can't think of a better way to do it. The recurring theme from The Prisoner, that you can't really be sure who is on which side, or even which side is which, appears here in a genuinely surprising way, calculated to pull the rug out from under Drake & the viewer. It is an excellent story, filled with colourful characters & suspenseful plot-twists, leading up to a genuinely shocking end. The only thing stopping it from being stonking good television is the cast of actors who are too recognisable from other roles.
------------------
60s jobbing actors 60s TV Danger Man ITC Steed's Library