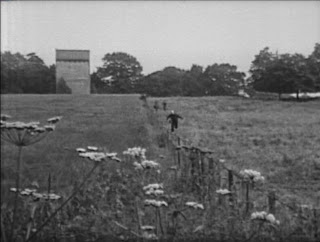 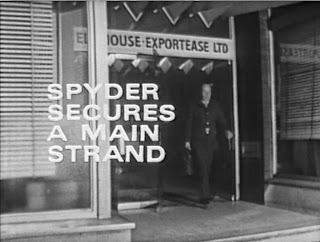 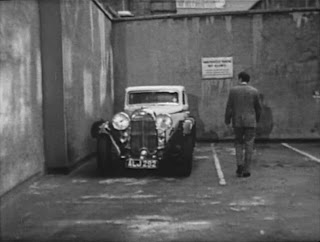 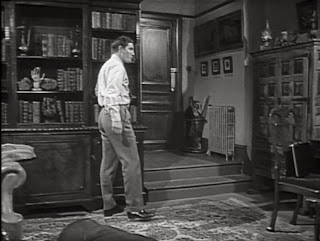 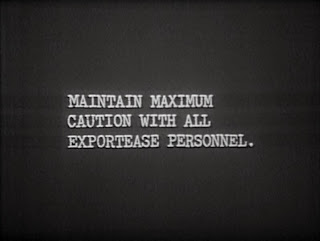 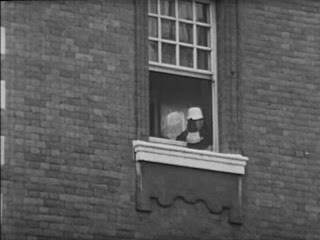 Yes, I know. This still isn't noticeably a post about The Corridor People <sigh>. I'm obviously going to have to come back to them. Instead it's actually happened - this is a blog about TV, & I hadn't decided what I would do when I got to the point of re-watching something I'd blogged about before (http://culttvblog.blogspot.com/2013/11/spyders-web-spyder-secures-main-strand.html) & wanted to write about it again. I've settled on another post. This is actually the second time I've been watching Spyder's Web since my original post, & I've reacted differently each time, the first by being unimpressed, & this time by warming to it all over again & thinking how good it is.
This time round this episode strikes me as the best of the series - I think I found the plot somewhat over-involved last time, but that comes across as being the point this time. However this invites the obvious criticism that if it is confusing on the first couple of viewings & it is the first episode of a series, the one-time viewers of 1972 wouldn't have stood a chance.
But its main impact on me this time has been purely visual. I can't begin to describe how much I love the Avengers-style, 1960s (not forgetting that the 1970s were most people's 1960s in Britain) - so you will forgive me for being a bit heavy-handed with the screen caps, won't you?
The scene in the field is so Avengers-esque, then the title shot of the man coming out of the modern office is such a staple of sci-fi at the time that it is almost as if Spyder is a self-referential commentary on the genre. It can't conceivably be a spoof, it's too serious. Hawksworth's Lagonda is clearly a caricature of John Steed's vintage numbers, though, & the fact it is out of order at the start of this episode is therefore a comment on the likely functionality of these high society, champagne-swigging secret agents! If the series is understood as a comment on spy-fi television & particularly its ridiculousness, the overly daramtic scene where Hawksworth is actually taken into Spyder, ceases to seem overdone. Well, it is still overdone but that is the point!
The repartee sparkles - I just can't describe it as anything else. It's actually quite sexy in this episode - more so than I remember it in succeeding episodes. I like the comment on a quick dip of your Y-fronts equalling engagement these days.
I see I downplayed the likeness to The Avengers in my previous post about this episode - this time it's kept making me think more of The Avengers. This time Hawksworth is so obviously a John Steed character, that I think I must have been resisting the screamingly obvious the last time I wrote on this. His repartee with the secretary, even his sparking off his boss, in addition to his flat, all strike the top-drawer-taken-into-the-service-at-Oxbridge-where-he-rowed-&-came-down-with-a-pass-degree persona (Hawksworth actually says a John Steed line about shooting people will keep them down!).
Yet this is so clearly not the whole story, either Hawksworth or Lottie Dean. Hawksworth is plainly better-read (at least judging by the books) than Steed - he is only ever seen reading Tintin or one of the leather-bound volumes in his library that amount to wallpaper. In Spyder both Hawksworth & Lottie Dean are seen lip-reading - no mean feat, believe me - in a later episode. Nor does one give the impression of conceding intellectual superiority to the other, as happens - differing depending on the female partner - in The Avengers. Mind you, I wouldn't go to the stake for this opinion, it's really based on a gut feeling I have that both Lottie & Hawksworth must have been selected for personal skills & qualities that would be really out of the ordinary. Yes I know - exactly as The Avengers would have been.
The creative ways used to communicate in this episode have struck me again with bother their authenticity & cleverness. When Hawksworth is reading the slides with his message from Spyder (changing them is over is relatively laborious in itself) raises the question of the sheer labour that would probably have gone into making those slides! Similarly the office equipment & equipment at Arachnid is so outdated it's incredible. And the smoking! It's only these things that have reminded me I wasn't born when this series first showed. The Avengers therefore ended well before I was born but doesn't give me that impression at all - I think it indicates the relative realism of Spyder's Web, whereas The Avengers could never be real.
So Spyder's Web is therefore both reminiscent of The Avengers in terms of the characters, yet different by virtue of being far more realistic. This obviously explains why on my last posting I was convinced it was totally unrelated but on this viewing it keeps bringing 'Avengers' into my mind. In fact even while I've been writing this post I've changed my mind about Spyder's Web somewhat - I have commented on the plot being complicated, but I think I may be missing the point. On balance I think it may actually be that this series opener is a piece of quality television that is no lightweight. I think this may not have come across before because the somewhat uneven writing of this series makes the entire series come across as more lightweight than this episode at times. It is clear that this episode taken alone is a piece of quality television on all levels that was unfortunately not maintained for the rest of the series.
------------------
70s TV Spyder's Web Steed's Library The Avengers