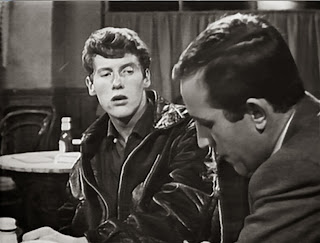 Police Surgeon, which ran for one series beginning in September 1960, is usually trumpeted as the predcessor of The Avengers. It received a lukewarm reception & was axed after its first run for reasons which differ depending on whom you listen to. The production was done by many names familiar to us from the early days of The Avengers, & of course Ian Hendry. It is even implied that The Avengers was thrown together as a vehicle for Hendry's star quality (source of this potted history: http://theavengers.tv/police/history.htm).
I have one colossal problem with this show, & it effectively prevents me taking it at all seriously: it's the theme music. All it makes me think of is strippers. Having safely got that out of my system hopefully I can concentrate on the actual programme.
I don't object to this show at all. It is plainly, to my mind, only a predecessor of the Avengers in that it comes out of the same gritty underworld milieu. It is *so* much of its time, in set-bound production, its social ideas, the fact that all but one episode are missing-believed-wiped,  even the mention of one of the long-gone psychiatric social workers, & the underlying idea screams 1960s ideas of do-gooding:
'Bond�s idea had been for a socially conscious crime series, the sort of worthy but rather dreary sort of thing that was all the rage with British television producers at the time. Dr Brent would be a bleeding heart police surgeon who would deal with social outcasts and the other assorted misfits who needed saving by people like Dr Brent.' (http://cult-tv-lounge.blogspot.com/2014/02/police-surgeon.html?m=1)
In fact what primarily strikes me about Police Surgeon is that I see it differently from the majority of the reviews I've read, for example:
'The half hour format of the show ensures the story is quite brief, and on the evidence of this episode the writers had aspirations to provide some sort of social commentary. The boy has spent most of his youth in borstal; Brent struggles to engage him with the idea of working hard to go straight. Hendry�s charm goes along way to kerb the preachiness, and there�s what appears to be intended to be a cynical twist at the end. It passes 25 minutes easy enough, but it�s dry fare with none of the flair, fun or fantasy of The Avengers; and if Hendry weren�t so watchable it could have quickly grown stale.
'Watching early Avengers episodes has awakened a longing for more to be found; but I�m in no hurry to watch more Police Surgeon and I won�t grieve too much if it stays lost.' (http://littlestorping.co.uk/2014/01/21/police-surgeon-easy-money-review/).
In fact, Police Surgeon was so little what I expected, I found it a pleasant relief. It is very much a crime drama of its time.
The main opinion expressed by Little Storping that I disagree with is that it is relieved by Ian Hendry. Obviously I'm only going by one episode but it's apparent (I'm re-watching Girl on the Trapeze as I write this) that Hendry is playing quite a different character from Dr Keel. He is one of these chummy people who think the youngsters just need to be understood, whereas in The Avengers he is a much more workaday old-fashioned GP. To me Ian Hendry is not the star actor of this episode at all, it is Michael Crawford playing Joseph Clark.
This is the nicest surprise of Police Surgeon as far as I'm concerned. I actually had to look online to check whether it was the same Michael Crawford! He so perfectly does the sulky, old-enough-to-smoke-&-get-into-trouble-but-still-a-kid-really act, perhaps very slightly overacting at times in the manner of the age. However this really shows his star quality as an actor, that I didn't initially connect this actor with Frank Spencer & the opera singer. Unrecognisable until I realised who he was - that is the mark of a really quality actor. I'm also interested to discover how unusual Crawford's own upbringing was in some ways.
Of course faults there are a-plenty. For me the major one is that the doctor is dumbing down his job to a mere chat with a very disturbed young man in a cafe. The young man in question clearly has the makings of a personality disorder - he evene talks about the kind of upbringing that causes psychopathy. That Dr Brent avoids the clear psychpathology in front of him & instead - almost - gets drawn into Clark's chaotic web, makes him an essentially flawed character, & makes a nonsense of the social concern the series sets out to portray, since he actually ends up contributing to Clark's situation.
So my summary is that, despite a flawed plot, this surviving Police Surgeon episode is a pleasant surprise & an excellent vehicle for Michael Crawford's surprise - to me - acting quality.
------------------
60s TV Police Surgeon The Avengers