The Man from UNCLE: The Shark Affair 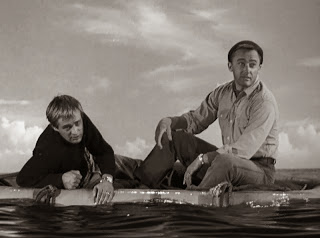 I see I have somehow managed not to post about the Man from UNCLE yet: I suspect this is actually because I'll tend to watch one show a lot for a bit then move on to something else (I mean, despite raving about it, I haven't rushed in with a post on Private Eye). The Man from UNCLE was one of my TV first loves, I remember watching repeats of it & Mission Impossible before I was ten, which was definitely before I watched repeats of The Avengers on Channel 4. I think at the time I fancied myself as an UNCLE agent, & certainly having seen some episodes of Mission Impossible recently, I much prefer The Man From UNCLE. It's not apparently that popular here, it's not even available on region 2 DVD, so I took the gamble of buying the entire set from amazon.ca in region 1 - it was cheaper than amazon.com & arrived an incredible two days after I ordered it, despite the delivery estimate being six weeks.
I think I prefer TMFU because it seems more international than the all-American (to me) Mission Impossible. I'm quite surprised how well TMFU has worn, although even in the sixties it was critically savaged, largely when it became more campy & slapstick in the third series. My personal opinion is that these qualities were there right from the start, & are certainly not lacking in this rollicking tale of modern-day piracy. Surely thrush was a nasty infection in the sixties as well as now? I mean how camp can it be to take over a ship & ask the passengers:
'I pledge my word no harm will come to anyone who makes a truthful reply. Are there any amongst you who can tune a piano?'
The matter of the piano tuner keeps being repeated - just the right amount, not overdone. Of course Solo & Kuryakin can see the pattern in the apparently random ship-takings & disappearances, as a spy story this one is a fairly simple example of the sort where the baddy is covering what he is doing, in this case with a wonderfully byzantine plot, almost guaranteed by the apparent simplicity of the advertisements & disappearances. This show is rather a vehicle for the Men from UNCLE, & the cast of extremely colourful characters that inhabit it. TMFU didn't apparently consciously follow the unreality premise of shows such as The Avengers, but I do feel there is a genuine element where the characters in this series are so overblown that they reach the unreality proportions of characters in The Avengers. Interestingly for a series 1 show, the agents' characters come across surprisingly fully-formed here. The extremeness of Captain Shark's insanity also makes him worthy of being an Avengers anti-hero: his preoccupation with a coming war plays on 1960s fears of nuclear annihilation, & some of the cults that arose at the time. Of course the point for the escapees is that they are all actually running away from their own everyday lives: an ultimately pointless task, since the point of 'the ark' is to be able to recreate the world as we know after the anticipated war, even as far as tuned pianos & thatched roofs!
My favourite scenes in this show: Illya Kuryakin picking up a subject for interrogation in a taxi that UNCLE keep for the purpose (not parodying the spy genre in the slightest). The two men being abandoned on a raft at sea so that they can be casually picked up by the ship (it is wonderful & so ridiculous).
There is a lot of movement - of scene, dialogue & plot - in this episode, so it doesn't come across as old fashioned at all. When the speaking device is commented on, it almost comes as a shock to be reminded that that would have been revolutionary technology for the time. The sparkling dialogue only slows down for Mr Waverley's slower speaking style, which gives the right impression of grand old man. The episode has even passed one of my more difficult tests for a TV programme - I have watched it several times while thinking about this blog post, & it has taken reputation very well: something that, say, Randall & Hopkirk (Deceased) doesn't. Its weakness, of course, is if you expect it to be a serious spy story, or even much more than an entertaining - albeit not totally air-headed - romp.
------------------
60s TV The Man from UNCLE