The Avengers: The Morning After 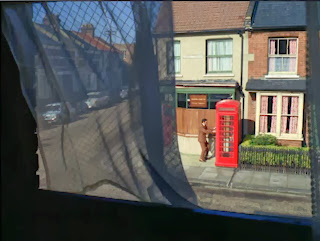 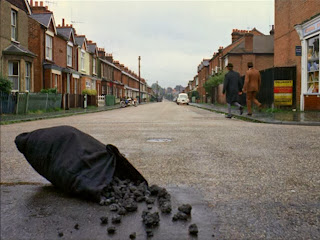 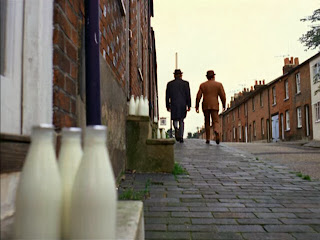 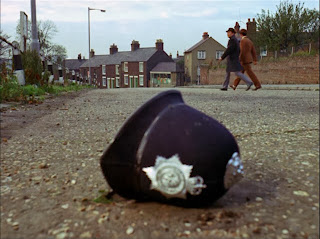 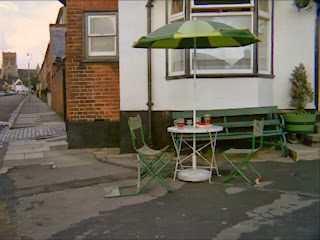 The beginning of this episode is deceptive: I always think, when I see the archetypal Thorson-era Avengers image of the clowns in the military base, that I've put on Stop Me If You've Heard This One by mistake! I suppose it's natural to fix on that episode as the one most likely to have clowns in it.
One of the things I like best about this episode is the 60s street scenes - the town is actually St Alban's (with a bit of Watford, & Old Hatfield). I've never been to any of these places & now don't want to go because the modern reality would never compare to the 60s Aveng-ified version we have here. The empty streets are such an icon of the approach the Avengers took to creating an unreal world, that that was a major visual device used in the Avengers film. Of course it took much less effort to create this effect in the 1990s than it did in the 1960s, when I believe it involved merging many repeated shots of the same scene, if it couldn't actually just be emptied (St Alban's was actually evacuated to film this). So I feel there is a very postmodern sense in which this episode is set in an archetypal Avengerland, one however which has been infiltrated by the baddies (masquerading as establishment figures as they do so often in The Avengers), who have emptied the Avengerland of goodies. This makes this one of The Avengers episodes where the 'rot' is placed within the establishment, planted by one of 'them'.
Personally I like the Linda Thorson season episodes a lot, & although I realise she's not really a hit with the die-hard fans I can't think why this episode gets the critical hammering it does. For example http://theavengers.tv/forever/king-17.htm comments that this one shows how the show can manage perfectly well without her, although I'm indebted to that page for the insight that this episode has references to The Avengers' chief American rival, Rowan & Martin's Laugh-In. I feel this episode comes close atmospherically to The Town of No Return. The sequence where Steed & Merlyn are going through the abandoned town handcuffed is cinematically excellent, & I would personally rate it with the kind of tension achieved by Hitchcock. An incredible sense of creepiness is obtained by the use of different camera angles, some shot from high as if from windows, which gives the impression there is someone there watching them. The scenes chosen for this sequence incorporate two things to create atmosphere. One is children's toys, a pram & a teddy bear, incredibly sinister just abandoned. The other is the use of some archetypally British things, foregrounded in the scene, so they are isolated against the background of Steed & Merlyn's journey. They include a policemen's helmet, & milk bottles. the location was also cleverly chosen to give the atmospheric Avengerland vista, in this case a pub, small terraced cottages, & a church, presumably St Alban's Cathedral. If you wanted to be cynical you could say these things were chosen to appeal to members of the American audience, nostalgic for the old country. I think another reason may simply be that those are the kinds of things that compose Avengerland. Think of Little Storping in Murdersville: what that is to a rural Avengerland, St Alban's is to a town Avengerland that yet isn't quite London.
I wouldn't want you to think that I think this episode is invulnerable to criticism. A frequent criticism is that the continuity is all over the place - coming from my position that these shows were intended to be seen once without pausing, this is allowable as those kind of things become more obvious with repeated, detailed viewings. Also things such as driving into a dead end street then driving out of it are noticed more either by people playing very close attention or people who live in the place in question. The footage of the evacuation is World War -II-era stock footage, which again I'm sure was used to give the right impression of an emergency situation with no expectation that it would be too closely analysed. Of course there are some familiar faces - Brian Blessed for one, & an actor who returned to the series several times: Peter Barkworth, who plays Merlyn, appears in three other Avengers episodes. He is recognisable as having been in other Avengers, but not distractingly so, he comes across quite different as a quadruple agent.
A further possible criticism is the plot - the plot to plant a bomb in the town, knowing that it cannot easily be evacuated again, is over-elaborate. I think to criticise the plot of this episode is to miss much of the point, namely that The Avengers is not real. These Thorson-era episodes really sum up for me the spirit of The Avengers, where the whole point is that (caricatured) agents of a Great Great Britain (which never existed) fight (overdrawn) diabolical masterminds of some (unspecified) enemy power, who have a (frankly ludicrous) plan to take over the world. Our heroes fight them using the (unlikely) weapons of umbrellas, teapots, etc. There is never any blood, & when the enemies are defeated we can go into the tag scene. The whole point of this is that it isn't real, & to criticise this episode's unreality is to miss the point entirely. I think even the continuity blunders, visible booms, & totally obvious transitions from locations to sets have a purpose in reinforcing the unreality. For me this is definitely an episode in the Stonking Good Television bracket.
------------------
60s jobbing actors 60s TV The Avengers