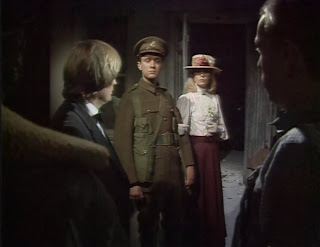 At the beginning of this episode Steel remains to all intents & purposes alone - something has happened to Sapphire, & Tully is obviously never going to be on a par with Steel. That said, the important human element in this assignment is maintained by Steel asking questions of Tully about the human consciousness. Tully is dramatically a necessary counterpoint to Steel here, & his humanity is a necessary counterpoint to Steel's, well, steeliness, such as when he tells Steel he realises how he feels about Sapphire. I do love the scene where he is chattering away to Sapphire's inanimate body about brass-rubbing!
The darkness is really on the offensive in this episode, taking Sapphire on board & using all the tricks it can against Steel, including an, as it were, hologram of Sapphire, whom Steel knows full well is sitting in the next room. She is so obviously working for the darkness when she tries to persuade Steel that the after-images are harmless & should be left alone.
I remember the darkness spreading as being relentlessly frightening when I was a child. It is so visually effective, in the background of both Sapphire & Tully chattering on in a reassuring, normal manner, to the foreground of Steel's questioning mind knowing there is something very wrong with this. It allows the suspense to build up to the shocking & iconic scene of Steel caught in the barbed wire. I like this dramatic memory effect better than I do the previous ones, since it forms part of the action here, it is a visual way of the darkness trapping Steel, & not merely a memory. The drakness then cleverly separates Tully from Sapphire.
This is where the real fear, & almost real point, of this episode come in, as does the real point of Tully. It now his turn to be isolated, helpless despite that he keeps talking about getting help. The darkness is clearly moving  him up to the bridge, the centre of the haunting, where of course he meets the soldier. The irony here is that he has actually got exactly what he wants: he can speak to the soldier face to face, he has actually met the entity that is inhabiting the railway station, & of course it is not at all what he wants.
The motif of be-careful-what-you-wish-for is continued in the soldier's short conversation with Steel right at the end: Steel has been trying to get in touch with him & has now done so. I like that the format of this assignment showcases one character at a time: even the soldier gets something of a spot here, he comments that he's sat & talked on his terms instead of Steel's. Of course that isn't completely true, since the terms are actually the darkness's terms, who is using the soldier. Here there is a use of more conventional Christian imagery than the dualistic dark-lightness imagery used up until now. Steel has actually come to the station to 'save' the soldier from the darkness, but the darkness has hung up Steel (in an almost crucifixion position) where he cannot do this, & the soldier's disgruntlement (his sin) makes him not see that actually Steel is on his side & the darkness is merely using him. This could be extended to see Tully as a prophetic figure who has been banished to stop him speaking out against what is happening. The fact that he was at the station before Sapphire & Steel means that he could also be interpreted as a John the Baptist figure, admittedly announcing that there is something going on at the station rather than that Sapphire & Steel are coming. I feel this assignment could also be interpreted in terms of a Freudian Oedipus complex, in this case co-opting mother rather than marrying her, & killing father.
So all in all I'm maintaining my changed opinion that this assignment is not over-long, since new depths of possible understanding are opening up as I watch through its episodes paying greater attention than I normally do.
------------------
70s TV Sapphire and Steel