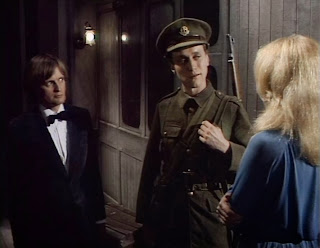 This is the famous episode where the thing happens with Sapphire's eyes. I don't do eyes myself & can hardly bear to look.
Steel remains in his priest/magician/intermediary role, & here the process is genuinely ancient. It wasn't their intention but 'it' enters into Sapphire's body & speaks to Steel through her, reminiscent of how a god or spirit would be called into a boy in the Greek Magical Papyri (I did say I had a thing for weird shit). In the great tradition Steel then makes a deal with 'it'. Steel shows his full cunning here, as he has a plan to trick the darkness. He also makes plain to Pearce that the darkness has deceived him, making him swap sides.
I want to side-step discussions of ethics but there is a sacrifice of Tully's life to 'it', to prevent the problem at the station. This is somewhat contradictory given that the point of this assignment is to prevent 'it' keeping on using the resentful dead who are feeding it. Of course this may not be the point because it is never fully explained who 'it' is. I also frankly don't like this as a resolution of the story, but this may simply be because it completely messes up the allegorical roles I've been arranging for the characters! Of course those roles could be understood as being set up, at least in part, by 'it', such as Steel being 'crucified' by 'it', & the resolution could be seen as Sapphire & Steel restoring the 'correct' order of things.
If I were to get rid of one episode from this assignment it would actually be this one, since I feel the resolution actually comes as something of an anticlimax. I think the assignment could have been ended in the last episode when 'it' was in Sapphire & the after-images gathered, if Steel had spoken to the after-images & turned them against 'it'.
My criticism of this assignment, as of all of Sapphire & Steel is that it is never clear enough what the enemy is. Some clues are given that 'it' is time, but usually it is just referred to as 'it'. This is of course almost a defining characteristic of Sapphire & Steel, but I think it contributes to its cult status of being relatively unknown. While full explanation stops further questions being asked, the fact remains that people like at least to know what is being talked about. This relative lack of explanation is both Sapphire & Steel's strength & a major weakness. Try to explain what the show is about to someone who has never seen it, & you soon run into difficulties.
However this assignment's strengths are enormous in terms of atmosphere, visuals, & sheer quality of story & acting. This assignment has to go, despite my quibbles about it, permanently into my stonking good television category.
------------------
70s TV Sapphire and Steel