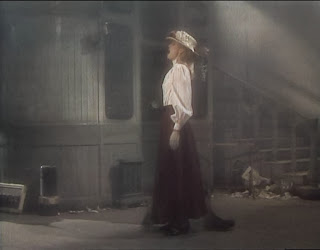 You thought I hadn't noticed what happened right at the end of episode 1, didn't you? I mean, that the soldier - the main soldier that is, amongst the mass of resentful deceased humanity - did make an appearance on the platform, to us while Sapphire was aware of something happening. I do feel the resentment almost passed through her, since despite the change in her clothing & the reappearance of the phantom flowers on the platform, she looks in pain, & describes the hatred. Tully can hear the band, & Steel instructs her to leave the platform. This forms the recap in episode two (it is at this point the titles start), & I deliberately didn't mention it in my last post, in which I focussed more on Tully, wanting to bring the soldier up as a new subject in this post.
The sequence in which Sapphire describes the day she is experiencing is incredibly effective, more so given that the effect is largely created by Sapphire's narration & sound effects, with no other special effects. It is here that the soldier actually appears in the booking hall to Sapphire. From this point the effect I feel becomes less effective since archive footage of the First World War is used, which reduces the narrative to mere ordinary television.
Steel has his first run-in with the soldier, who isn't even a ghost but described as an 'after-image'. The soldier also shows his true nature as an awkward cuss. Sapphire & Steel actually do a good hard cop/soft cop here, I don't need to say which is which. The need for Tully is also apparent in this scene, since his sympathy for the poor lad, whom Steel tells him is evil, is a nice foil for Sapphire & Steel's more disinterested investigation of the station. Tully's world view seems to be alternative enough, since he volunteers the opinion that Sapphire & Steel communicate by thought transference, but Sapphire delineates their even more alternative view to him - this is plainly background for the audience - & he just wants to know more. I feel this scene doesn't work that well, I'm not convinced a relatively lengthy explanation works at this point. It would have been better after the recordings Steel finds on Tully's tape recorder, once again creating atmosphere with almost no special effects at all.
One of the criticisms directed at this assignment is that the issues of time are all over the place: references to both First & Second World Wars occur in this episode alone, & Steel uses Tully's circa 1980 vintage equipment, which he has already described as out of the ark, as part of his investigation into what is happening at the station. Personally I feel the point being made here is that the leak means that events of different time frames are re-enacting themselves all at once, & that is itself the problem. There, I've done it. I've claimed to understand Sapphire & Steel (& soon after The Prisoner, too). I'd better go & have a lie down. Incidentally I love the names given to the tropes used in Sapphire & Steel on the TV Tropes webpage (http://tvtropes.org/pmwiki/pmwiki.php/Series/SapphireAndSteel). They include Good Is Not Nice, Glowing Eyes, My Significance Sense is Tingling, No Social Skills, Reality Bleed, & Suspiciously Similar Substitute!
This assignment has significance for me personally as it was the first I watched when they were originally broadcast (the other was the final assignment). Imagine how scary Sapphire & Steel was to a child! I think my mother probably made some attempts to stop me watching it, but this was the child who took Harry Price's books on Borley Rectory out of the library, & I persisted. For this reason I tend not to see these two assignments at all objectively, although I think assignment 6 has aged much less well than this one. In fact I'm finding it very difficult to think of any criticism at all for this turning point of my childhood. It was certainly just the thing for an imaginative child destined to explore the worlds of all sorts of weird stuff.
I suppose the criticism has to remain that this assignment's story moves at the pace of a very elderly debilitated snail, & in fact consists of a story that certainly doesn't need to be stretched out over eight episodes, I think it could even be a single hour-long drama. I actually don't even want that to be a criticism, really. I want to say that seventies television was different from the even shorter attention spans we have now. I want to say that the pacing is essential to the nature of the drama. I want to say that the slowness of this assignment reflects the painstaking nature of a ghost investigation, & the way in which the restless resentful dead cannot be rushed. I even want to say that the pacing would seem different when watched on a one-episode-per-week (or day) basis, without pausing or seeing it again, as it would have been watched originally.  But this would be disingenuous: the reality is that the main valid criticism here is that this assignment is stretched out for too many episodes.
And yet this drama has quality written all over it. The characterisation alone - the brief introduction to what is up with the soldier creates incredible suspense & really tugs at the heart-strings about him. Once again this is done with minimal special effects. The entire effect of this episode is to make the viewer want to know what's going on, prompted by the hints that the soldier wants 'us' (the viewer is cleverly included here, it doesn't give the impression at all that he only wants to talk to Sapphire & Steel) to know something, which in turn makes us want to know what it is. Towards the end of the episode the differing clues given about times, & the changing hints given about places, increase the viewer's curiosity. If this isn't stonking good television, I don't know what is!
------------------