The Champions: Shadow of the Panther 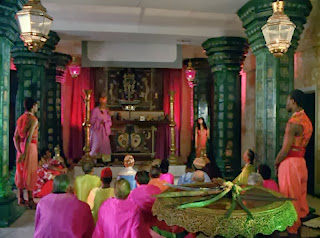 I was all prepared not to like this Champions, since it draws heavily on the (usually misunderstood) African diasporic tradition of Vodou. In fact - to get this out of the way - it's not really about it at all, it's all a cover. The only thing it gets really wrong is to refer to the Spirits as gods - they're not, it's actually monotheistic. Rant over.
Actually the vodou thing is handled with an incredible sureness, that means it isn't overdone in an attempt to instil fear. I think it's the fact that the lift is involved, that you see people going into the lift & emerging apparently zombies, gives it a lightness it wouldn't otherwise have. I suppose technically the whole vodou element is a red herring, because even that's a front. Everything is a front in this one, & vodou makes a good one because people will either dismiss it or be frightened of it. The effect on the people is caused by plain hypnotism: in most series this would seem a bit exotic, but in The Champions it's relatively vanilla! The secret powers they have (the fact they are secret is announced in each episode over a scene of them showing them off in public) are mainly limited to the psychic stuff, which seems more believable than the speed typing & what have you in the past few episodes.
I find the plot of this episode very strong. The multiple cover stories are not too much. I'm torn by the vodou aspect: it is either essential here or this show could be any sixties espionage show with an extra layer on top. For me the people who have been hypnotised behave strangely enough that any attempt at a cover story is insufficient. On the other hand as a cover story it is so woven in that I feel it serves a real function in this episode. I just feel that if you went through the script you could do this one in a hotel anywhere.
So all in all a strong Champions episode, atmospheric, with strong guest actors. I'm just ambivalent about the need for a major layer in the plot!
There are some serious quality actors in this one, both early in the careers who thus don't dominate. Donald Sutherland has a cover as a journalist, & does a good zombie. His distinctive voice & accent are perfect for his role, giving the right effect of a drawl when he's chatting Sharron up. Zia Mohyeddin is the hotel manager, he's - to me - surprisingly good at it, but I know him best in his regal role in The Avengers' Honey for the Prince.
------------------
60s TV ITC The Champions