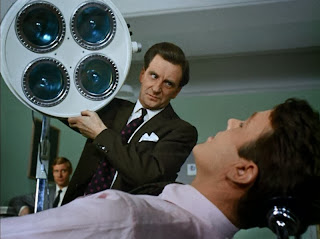 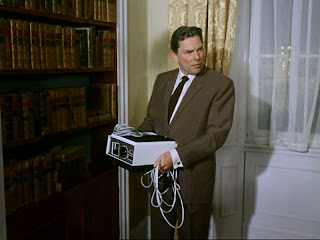 I've neglected to comment so far on how much I love the very obviously hand-dran maps that announce the location of each adventure. You wouldn't catch that happening nowadays! Shades of The Man from UNCLE in this episode, with a tailor's shop (admittedly not a cleaner's) providing a cover for a secret vault, accessed through the changing room. I feel the sheer complexity & quaintness of the security system suggests the consultant who devised it was a very elderly lady! There are also shades of The Avengers episodes The Mauritius Penny & The Hour that Never Was in the use of a dentist, which is bound to cause a sensation of at least discomfort if not fear, in any number of people.
I feel this Champions episode is unusual in its all-out use of technology, which is needless to say trumped by the Champions' super powers. It is unusual to find such technology in this show. If the language of props is to be understood, Steed's books are displayed to best effect ever, establishing an educated, establishment background. In the scene in which the books appear Sharron sits in an armchair that also appears in The Avengers (don't tempt me to start a 1960s Independent Television Props blog...).
This episode's strength would be a weakness in any other show. I don't think it's overstating it to describe the point of The Champions being its ridiculousness. In this series everything is overdone to dramatic (or comic) effect, & this one is no exception. The basic premise for the show - the security system for the F-File is so excessively complicated, & in the wrong way, that it can easily be broken. A system complicated in other ways, such as needing multiple people to access the vault, could be simpler yet stronger. The system here allows for wonderful visuals, an amusing security system, & the opportunity for a showdown in the dentist's chair.
There's relatively little in the way of super powers on display here. I don't like the incongruousness of the change of scene for the post-titles example. I'm also trying hard to find fault with the fact that Richard memorises the F file & so doesn't have to take it. That's cheating on what they're actually supposed to be doing, which is trying out the security system. The system is actually for normal people, if you don't take the file (or photograph it, or whatever) you haven't finished the test. Of course this could be interpreted as The Champions knowing better & so deliberately *not* doing what they've been asked to, in which case the memorising of the file could be seen as safeguarding its contents if it's at risk. Hmmmm. I don't like this, the complexity of this episode prevents it hanging together properly.
There are familiar faces - at least to other people - in this one. The one best known to me is the shop assistant, Robert Mill, who plays the wonderfully sinister character Brown in The Avengers episode Killer Whale.
My few gripes about the plot (& I only feel as if it ought to be wrong) aside, this is a very strong Champions episode if you don't subject it to the sort of attention I do!
------------------
60s TV ITC Steed's Library The Champions