The Champions: The Mission 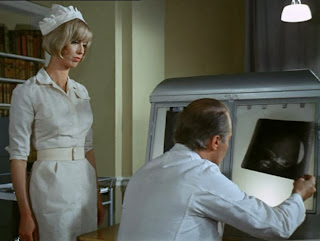 I think this may be one of my favourite episodes of The Champions, not least because of the feat of speed displayed at the beginning catching up with a van.
There is some seriously strong acting ability here - I wonder whether 'alcoholic homeless person' is a stock character at drama school, but some actors get the feeling of fragility just right, as Harry Towb does here. There are some of the sixties recurring faces here as well, unfortunately I did find it distracting here, working out just which episodes of which shows I've seen them in. Anthony Bate is superb as the doctor, just chilling enough. It would be dangerously easy to spoil the role by giving even the slightest hint that it is not serious, but Bate plays it completely straight. I just wonder whether Steed resents him going off with his books from Stable Mews. I feel the role of the nurse doesn't suite Patricia Haine as well as the role she played in The Avengers' Who's Who - she seemed to relish the role there, but seems a little wooden in this one.
In fact, what this programme is, is a farce based on gangster movies, played straight, which is what moves it into the stonking good television category for me. It borrow literally all of the stereotypes I gangster films, even the idea of changing identity with plastic surgery. I love Stirling pretending to be a New York gangster.
The story is of course ridiculous. Don't misunderstand me, this isn't a criticism, it's a statement of fact. Most of the television I watch is based on the ridiculous, & gritty realism this ain't. It is in episodes like this I feel that The Champions begins to approach The Avengers in stonking good telly stakes. What ensures it could never get there is the lack of the strong leads, & the way it tries to make unreality real by strange powers. Other than that this show gets close to the winning Avengers formula. This is extremely high praise coming from me.
The farcical element is rightly played straight, since it is apparent that the doctor is so skilled as a result of the experiments he carried out in Dachau. This ought to be absolutely chilling, the idea of a Nazi war criminal hiding here providing an escape route for other criminals. Even the fact that he alters people's faces to look like himself is chilling rather than humorous, if it is remembered that his face must be wanted be an awful lot of Nazi hunters.
I'll have to bring myself back down to earth by reflecting on a couple of shortcomings. The pace slows significantly after the discovery of The Champions' blood group. The role of the homeless men is rather unclear, although this may actually be a strength, if it makes the viewer reflect on the possibilities given Dr Peterson's predilection for experiments.
All in all a Champions episode with strong plot & acting, putting it in the stonking good television class.
------------------