The Champions: The Body Snatchers 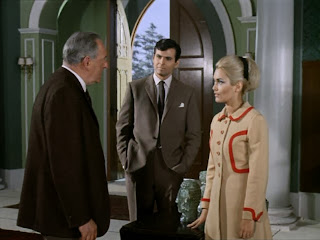 The great & glad news is that I've ordered a single disc of the last episode of The Prisoner so will soon be able properly to finish my survey with an eye to whether John Drake is Number 6. Since my last post I've been watching mainly The Professionals, I think as a natural antidote to the weirdness of The Prisoner, but it's back without a pause into weird shit territory with this episode of The Champions. In fact, a friend originally recommended The Champions to me, saying I would like it because it's weird!
On the surface the plot of this one is fairly typical of 60s eccentric TV shows - megalomaniac wants to sell us out to 'the opposition' - but here with the added touch of General Patterson's body in suspended animation being held hostage. Definite shades of The Avengers episode Split! This was a definite 60s preoccupation, the process being new & famously used at the time to preserve Walt Disney. Another visual reminiscent of other 60s series would be that the baddy's henchmen are dressed in flat caps (I must credit my paying more attention than usual to this to a review at http://m.imdb.com/title/tt0538471/reviews#showAll). I have a feeling there are lots of other shows of this era where this is the case, although the only one I can think of offhand is The Avengers episode The Rotters. The reviewer mentioned above wonders whether he fancied himself as a country squire. Clearly the flat cap makes a class reference at the time, although in The Rotters the baddies who wear them clearly fancy themselves as 'quality'. In fact it seems these are exactly the ambivalent class origins of the flat cap:

'In British popular culture, the flat cap is typically associated with older working class men, especially those in northern England, and the west country, as personified by Fred Dibnah and comic strip anti-hero Andy Capp. The flat cap's strong connection with the working class and the East End of London is illustrated by Jim Branning of the television programme EastEnders and Del-Boy Trotter of the programme, Only Fools and Horses. Taxicab and bus drivers are often depicted wearing a flat cap, as comedically portrayed by Norman Hale and Gareth Pace's (Hale and Pace) "London cabbies" television sketches. AC/DC vocalist Brian Johnson, a native of Newcastle, customarily wears a flat cap on stage and frequently off.

'However, the flat cap can also be taken to denote the upper class when affecting casualness. "A toff can be a bit of a chap as well without, as it were, losing face."' (http://en.m.wikipedia.org/wiki/Flat_cap)

Another 60s preoccupation embodied in this episode is announced when Inga says 'I'm a scientist': in many ways the 60s saw a great love affair with 'science' as the way forward & yet a fear of what would happen if the 'science' got into the wrong (that is somebody other than ours') hands. Here the sides are clearly drawn, although interestingly the opposition is not based on the other side of the Iron Curtain. Deference to Inga the nonspecific 'scientist' is the rule here - of course it is juxtaposed with the completely unscientific strange powers of The Champions, so the ultimate message is actually that these magical powers win over cold modern science.
What made me go straight to this episode was that I was reading a website last night about 'Avengerland' locations around Britain. All of the locations used for this episode are classic Avengerland ones, although the story itself is actually set in Wales. This is notwithstanding that a lot of the episode is shot on set, so the locations are mainly used briefly or even for only establishing shots. That the sets are obviously sets does not spoil it for me - this was standard for the TV of the period. I particularly like Grim's Dyke Hotal in Harrow Weald, familiar from The Avengers episode Game.
Lots of reliable 60s reappearing actors in this one, although for me it just makes it that the baddy, Squires, is played by the actor who played M in the James Bond films!
My one criticism is that the super powers shown tend to be a bit samey, revolving around great strength (with some psychic abilities & control of body temperature to survive the freezing process). The scene where Sharron shows off the gamekeeper character is unfortunately speeded up, which makes it look a bit slapstick, in contrast to the rest of the show.
I like this episode of The Champions, as a strong plot (written by Terry Nation) with heavy 60s overtones, set in a (supposedly Welsh, but actually Avengerland) setting.
------------------
60s TV ITC The Champions