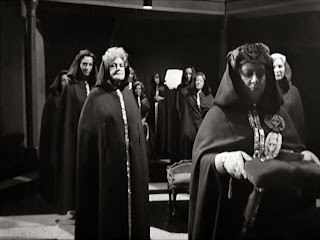 I have an agenda for wanting to write about this episode of Adam Adamant Lives - I always seem to lose the plotline halfway through, so want to force myself to watch it more attentively & see what I think. My loss of the thread *may* be because of a plot fault - it doesn't score very highly on imdb.
It is certainly, on the surface, a different kettle of fish from most Adam Adamants, taking place in a completely female reserve, which gives Adamant a fit, but would provide a role for Miss Jones in which she is more necessary than usual, instead of just interfering. It is also frankly chilling: the invitation to your own death can only be described as horrifying. Similarly sending a member of the League round to the house with condolences even before Adamant knows about the death yet is a good touch. Of course in the circumstances Adamant really should have grabbed & questioned the bringer of sympathy, but then I am not a gentleman like him, & his priorities are obviously different.
In sound terms this episode works extraordinarily well. I particularly love the bit where the music is 'Gaudeamus igitur' played on the organ, which segues into the Adam Adamant theme. The names in this one are in themselves marvellous-sounding: Prudence, Faith, etc. Prudence comes across as a marvellous 60s siren. Faith comes across as marvellously deranged.
This episode uses the time theme of Adam Adamant much better than some of them do. There is much mileage to be gained in Adamant revisiting the building which housed a gentlemen's club of his youth, & even more in the changes that have been caused by its becoming a women's club, in the intervening years. There is a reflexive sense here in which the women are reflecting back the nature of male privilege, by adopting it as their own. It shows up the pride & yet vulnerability of the way humans create institutions. Of course this is only my reading of this episode's moral: it would be easy (as Adamant probably would himself) to read the events of this episode as being the sort of thing that inevitably happens when the fairer sex start trying to encroach on the province of men.
This is inverted in Adamant's arrogance of telling Jarrot, whom he is supposed to be protecting, that absolutely nothing can happen to him. Admittedly the murder method is not the world's simplest! Similarly the role-reversal-of-women theme is reversed yet again so that when Miss Jones gets a job at the League she is merely the cloakroom attendant. Nor does the reversal end there: it becomes apparent that a man is behind the league really, although Faith, Hope, & Charity appear to have the best of motives for going around killing off the great & the good by hypnotism.
My main criticism of this episode I suppose really applies to the whole series: in my opinion Adamant's character is basically flawed by being a cardboard cut-out figure from the Boys' Own Paper. In this episode the little ladies can't do anything without having to be rescued by Adamant (or in this case rescued from killing him). I understand that Adamant's whole point is to be an anachronism, but since he is the lead character in this series he dominates the plots with his olde-worlde attitudes, which cannot be ameliorated by any amount of driving round in a Mini. His central presence hinders development of subtlety in peripheral characters by effectually reducing everything to his own view. I think this, for me, is also why the intended humour of Adam Adamant doesn't work, since this is quite simply not funny. I feel the anachronistic characters thing works better in The League of Extraordinary Gentlemen: perhaps Adam Adamant would have been better placed as a less-central character, it works in the film because there are a number of fictional characters alive at once.
This - admittedly rather major - criticism aside, this is top notch. Excellent plot. The League is a wonderful invention. Costumes work marvellously visually. Using flags as a murder weapon is inspired. The good characters are rightly a little bland to provide a plain background to the Amazing Technicolour Adamant. The villains of the piece are unfortunately the most colourful characters, which is a dead giveaway!
Best line from this one:
'My friend is called Abstinence...she drinks like a fish.'
------------------