The Prisoner in the Asylum: Free for All 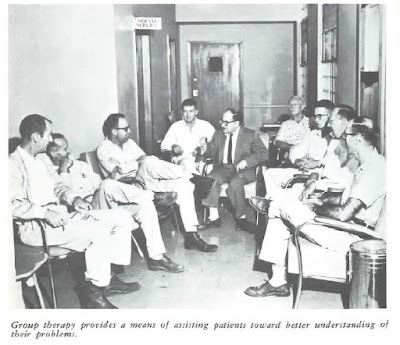 Starting series of posts which take over my life seems to be the theme of 2022 on the blog and so a mere four posts in, we finally get to episode 2 of The Prisoner in the production order, Free for All. I suspect that several episodes are going to take a number of posts and others are going to end up squashed together in one post. I wouldn't bet on there being seventeen posts at this stage: this is an adventure which really does feel like it's going to get its own life and run away from me.

In this episode Smith begins his therapy. He, and doubtless others, has a mixture of individual and group therapy in the village. How can I possibly see what is going on in The Village as therapy? Watch the initial breakfast scene between Smith and Number 2 up to the point where they go out of the cottage as Number 2 is talking to him about running for the office of Number 2. If you see this as an initial therapy session it looks much different. There are some questions to get to know each other. Despite Smith being utterly vile to him, Number 2 persists because Smith is this complex, dangerous psychopath and Number 2 is a professional. And it is also in this scene, and it can't be over-emphasised, Number 2 explicitly tells Smith why he is in The Village, and the whole point of joining in by running for office - if he is elected to the office of Number 2, then Number 1 will no longer be a mystery to him. Now because we have all seen this before, we already know that Number 1 is Smith himself. In this scene, Number 2 gives him the whole key: the whole point of The Village and what he will do there is to get to know himself and, through therapy, to reconcile his divided self. They'd also rather like to know what he's done with Seltzman's body but he doesn't mention that here. In fact he explicitly tells Smith that this is about getting to grips with himself in therapy because Number One is slang for yourself, as in looking after number one.

This is why we find the repeated emphasis on living in accordance with what society considers acceptable - Smith has an antisocial personality disorder and his therapy is therefore to learn to live with his own inner world and to engage in new ways with the world outside. This is the true meaning of 'playing the game according to the laws of a democratic society' - the therapy will result in an ability to live outside and be integrated to society. But what has that to do with running for office in The Village? The answer is that The Village is heavily influenced by a very particular therapeutic approach which was having what we would now call a 'moment' in the sixties, the therapeutic community approach. It is not actually run on the democratic, or even anarchic, lines of many of the actual therapeutic communities. However apart from the seemingly earth-shattering idea that it is a good idea to treat people with respect and kindness, the ideas of social psychiatry, where the individual both reaches his best humanity in society and also finds his therapy in an environment as near to society as possible, became all pervasive after the experiments into this approach in the Second World War. For example, the World Health Organisation's expert committee on mental health is here suggesting ways for a therapeutic atmosphere to be attained in psychiatric hospitals, and I defy you not to see many reflections of The Village in this passage:

'The [WHO Report of its Expert Committee on Mental Health 1953] argued that this [therapeutic] atmosphere could be created in a number of ways. The fundamental idea from which these techniques sprung was that the therapeutic community should be modelled on the extramural community, building on the basis advanced by 'forward psychiatry' during the war that patients were best treated as they had been before they fell ill. This took various forms. The first was that every effort should be made to preserve the patients' individuality and self-respect. Civilian rather than hospital clothing would be worn; sharp cutlery would not be removed; and confining walls, bars, and locked doors would be removed. The second was that patients should be encouraged to have a sense of 'citizenship' and 'responsibility for the general atmosphere of the hospital.' As such they would be encouraged to spontaneously form sports and social clubs as well as protest groups who could negotiate with the hospital's administration. The third was that both the administrative and medical staff should trust patients. It posited that this trust would encourage patients to refulate their own behaviour and to discourage 'anti-social' behaviour in each other. The hospital should also, it argued, 'devolve' some of its running to the patients under the direction of a medical superintendent.' Oisin Wall, The British Anti-Psychiatrists. Routledge, New York, 2018, p. 44.

If you were to say that these adjustments are tiny to the point of insignificance and actually spell out the plight of the patient, as well as being patently pretend as in the election, you would of course be right. And my contention is that this is exactly what is happening in The Village. It is quite literally the spitting image of one of the more progressive psychiatric hospitals of the fifties and sixties - although it may develop further as the series progresses.

In my last post on the series I commented on how the 'Where am I' dialogue which begins this and most episodes of the show is very like the conversation an unwilling patient with their team has about why they are in hospital. The tone of conversation here carries on beyond the initial dialogue and marks the entire conversation which follows between Smith and Number 2.

In fact I have noticed with this episode that if you watch it with the assumption that it is about mental (ill) health and taking place in a very particular sort of hospital, pretty well every conversation sounds much more as if Smith really isn't well. Perhaps the best example of this is in his speech to the electorate (starting just after the 32 minutes point) where he frankly sounds rather deranged. When you question what is happening for him this is not the speech of a well man at all.

There are numerous events in this episode which fit happily into the daily life of a psychiatric hospital. Smith has a psychological assessment. For some, absconding and being brought back by the staff (Rover if you are deluded enough) is a commonplace. The drinks are non-alcoholic as as not to interfere with the medication. It is possible that the meeting of the outgoing council is Smith's misinterpration of a Mental Health Act review tribunal, a ward multidisciplinary team meeting etc.

There are a couple of scenes which may appear difficult to reconcile with a psychiatric understanding of the show but I think they may both be best understood through the filter that we are seeing things through Smith's own eyes and that he really isn't well (I think I may be resorting to this explanation quite a lot during this series of posts).

The first is when Smith is with Number 2 in the therapy zone. I think he might be misinterpreting an actual therapy room of some sort - I wanted to say a padded cell but it is only in the real world that politicians should automatically be assumed to be fit to be tied.

The second is the final scene with Number 58, and I will repeat that the maid's uniform can well also be interpreted as a nurse's uniform, perhaps one intended to be less institutional than usual. While it is far from unknown for a nurse to lose it enough to strike a patient, I think that what has happened is that he has been allowed into the green dome as a sort of psychodrama as part of his therapy and he has experienced some kind of inner shock or breakthrough. Smith has felt this physically and has interpreted this as Number 58 (the nurse observing him) slappinng him, so that what we are seeing is what he is feeling rather than what is happening. She is clearly concerned about him and tries to talk to him in a reassuring way and then gets other nurses to come and take him to Disturbed. It's not impossible that she's speaking English throughout the episode but he's so far divorced from reality he just can't get it, although the language thing is one of the less easy aspects of this episode to squeeze into the psychiatry theme.

To summarize: in this episode Smith begins his therapy in The Village, which is an emlightened hospital operating using the principles of social psychiatry. Many of the scenes depict daily events in the hospital but some are rather mystifying to the viewer because they are seen through Smith's own eyes and he really isn't well.