Showing posts from March, 2014
Show All

The Man From UNCLE: The King of Diamonds Affair 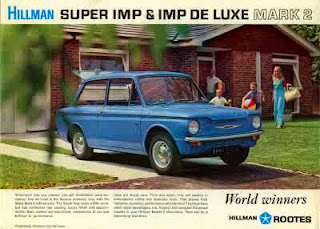 This is an episode of TMFU that so badly tries to be The Avengers & misses the target in some subtle, yet dramatic ways. It begins with a woman in a hotel in London breaking a tooth on a rough diamond found in a tin of Pogue's Pudding. Needless to say, no amount of putting red telephone boxes on the corners of a standard American street set won't turn it into a London street scene, & much of the charm of this one for me is the near-caricature of Britishness it presents. The accent of the woman who bites into the Pogue's pudding is good but not quite right to a British ear (it's overdone), there's a fire hydrant in one scene that is definitely more New York than London, & so on. That said, I don't think the unreality of this show is really a shortcoming. It almost feels in season 2 of TMFU that they's picking up on something in the zeitgeist that The Avengers also picked up on, by attempting to create a world where you can really imagine so
2 comments
Read more

Public Eye: Works with Chess, Not with Life 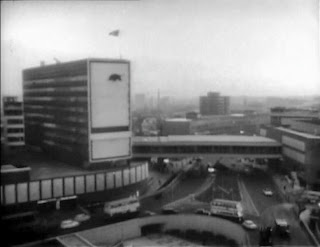 I told myself I would resist blogging about the Birmingham-based episodes of Public Eye, so as not to get annoyed by fake Birmingham accents & the sixties scenery, so of course here I am blogging about one of those self-same episodes. I like Miss O'Hara (Valerie Bell) enormously, she has none of the drama school melodramatics & clearly comes across as the floozy in search of a quick buck. As a prelude to the main part of this episode it offers the wonderful cameo of Marker wining & dining her, all in the name of duty, of course. The morals of this part of the episode are very clear-cut in comparison to the very complicated relationships of the rest of the episode. I like the structure of two stories related by their characters in a single episode: if the episode had been built solely on the adulterous doctor it would have lost some human interest & been a much more sui-generis private investigator story. Here, however, Marker's character really gets
Post a Comment
Read more

The Man From UNCLE: The Hula Doll Affair 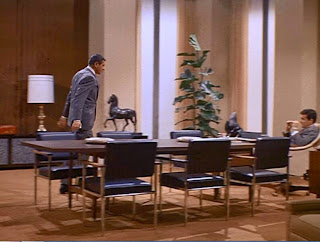 After my post on The Off-Broadway Affair I had a doubt as to whether The Man From UNCLE could possibly be satirising American society as much as I thought it was. On the against side is that I am of course seeing this matter through the eyes of an outsider, & The Man From UNCLE is hardly heavyweight televisual social commentary. However watching this episode I am confirmed in my view that there is at least a heavy streak of social satire, if not commentary, in this series. For one thing this episode continues the Thrush-as-corporation theme, with an at times advantageous comparison to UNCLE, right from the words of the man in the tailor's at the start: 'I bet Thrush ain't so cheap'. Additionally this episode satirises that great American institution of the family, through the medium of the Sweet family, who have made Thrush the family business. A more classic spy thriller theme is also added by the necessity for the UNCLE agents to rescue the M4 in a heatwave b
4 comments
Read more 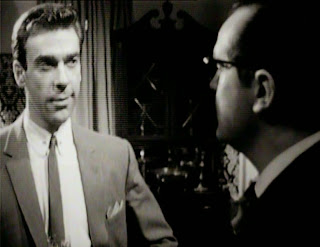 I have commented recently on the unreality vs reality dichotomy of sixties TV. For some reason Callan didn't do it for me, but Public Eye does, & so this post will mark a rare trip into realism TV on this blog. In fact this approach was intentional: 'Roger Marshall and Anthony Marriott were the creators of Public Eye.�Roger told The Daily Express (1.8.69) "I got fed up with series like The Avengers, sick to death of the camp and the champagne. The series was created as an antidote to that kind of phoney material. I felt it was time to get down to reality." He had�an idea for a show about an enquiry agent but found TV producers struggling to believe that such individuals existed, wedded to the traditional idea of the tough private eye fighting serious crime. However Anthony Marriott found such a real-life agent in Brighton and this helped to convince them. It does seem that this agent's experiences helped to inspire some of the stories, particularly the e
Post a Comment
Read more 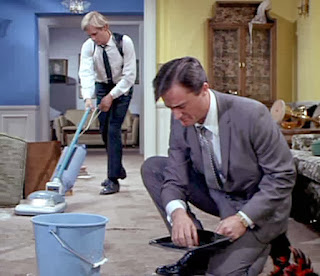 Oh dear, I'm starting to heap up the draft posts (& ideas for posts a bit, but since I'm watching Series 3 of TMFU, & this one came on, I just had to post about it. Like The Off-Broadway Affair, I feel this episode is best watched as a satirical comment both on suburban life (perhaps in a similar vein to the way Bewitched satirised suburban life) & the spying industry. Of course the nature of the satire is that Peaceful Haven is crawling with power-crazed megalomaniacs & spies. Of course they're deranged. Of course the plot is deranged. Of course the attempts to kill the UNCLE agents are deranged. There are two familiar faces - to me - in this show, & just for a change they're not the usual round of actors who appeared in every British series in the sixties. Victor Borge - we had some of his records when I was a child - does a surprising turn as a 'straight' actor, although clearly with a nod to his normal self, since he plays a musici
2 comments
Read more

The Man From UNCLE: The Off-Broadway Affair 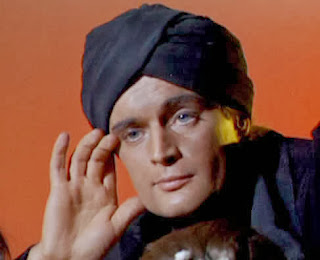 It was series three that made the Man from UNCLE lose popularity, supposedly because of the introduction of high-camp elements, which, as I have noted here before, were actually there from the beginning in my humble opinion. One of the things I find interesting about this episode is that the opening scene is so visually derivative of The Avengers: the step ladders reminiscent of Mother's only-used-once office, & the red phone box. It is rather a misdirection because (to my eyes) it leads to the wrong impression. However I personally am not disappointed by the rest of it. I *love* the idea of Thrush operating from a theatre. I love it, I can't describe how much I love that idea. It's almost a parody of UNCLE operating out of a tailor's shop, & shows which parody themselves have to be careful how they do it. I can see where it went wrong here: espionage fans would be very disappointed by this episode & others in this series, it's quite a change in d
2 comments
Read more 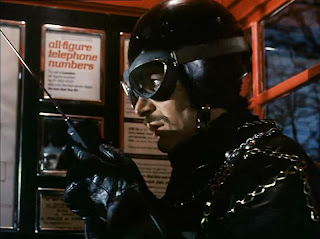 In my own rather constrained world-view there are two opposing tendencies in the television of the 1960s & 70s, realism (Callan & Public Eye: this tendency came to the fore in the 1970s in The Professionals & The Sweeney) on the one hand, & on the other hand unreality (The Avengers & most of the shows I really like). Normally Department S would be in the unreality side of the divide, but for the first 11 minutes of this episode it has a creditable go at being a gritty tale of shady dealings in London's underworld. The episode gets off to an excellent Avengers-esque start with the image of the masked men arriving at the building site. I mean, this is so Avengers it is almost a pastiche. In fact it feels very much like the show is a pastiche of first The Avengers & then the gritty detective genre before coming to as a Department S episode. Fabiani does an excellent hard man/Bond role: it starts off Bond in an exotic location before becoming hard-man-using
Post a Comment
Read more 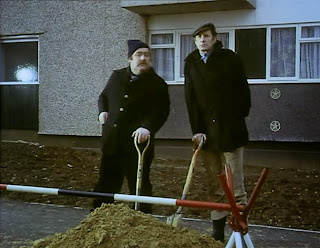 I am beginning to think that these eccentric sixties tv series are a cultural genre unto themselves that must be approached in a particular way. They have to be watched in a relatively unquestioning way, & enjoyed for what they are without picking holes, because they're not built for any great analysis. This episode is a perfect example of that: I have watched it countless times, aware that the entire basis of this episode is wrong. The problem is is that it is obvious from the start that what is going on is a confidence trick of some sort. I can only assume that Randall's head was so turned by talking to his dead partner that he did not ring the police there & then. That is what anyone sensible would do faced with the scenario delineated here. This - rather major - plot failure isn't the only hole in this plot, which when you examine it looks like an old-fashioned string bag. The fake Marty's plot wouldn't have worked, because of the simple fact that m
Post a Comment
Read more
More posts