Showing posts from February, 2020
Show All

Randall and Hopkirk Deceased (2000 Version): A Man of Substance

I never thought I would ever be blogging about this show here. The original series is one of my favourites and I thought this one had everything I dislike: I loathe remakes and thought this was one. But then I read a blog post by Grant Goggins about a different episode  (here ) in which he says, I’m afraid the previous three episodes were really uneven, but  Randall & Hopkirk  went out on a high note written by Mark Gatiss and Jeremy Dyson as a very cute tribute to  The Avengers . It’s  “Death at Bargain Prices”  crossed with  “The House That Jack Built”  as Jeff and Jeannie are trapped in an escape-proof department store full of lethal traps. And just to add to the tips of the bowler, they brought along some mannequins that evoke the Autons from  Doctor Who  and dressed one of them like Steed. ... And of course I was smitten. This series manages to play tribute to just about every classic TV series and film ever made, including often focusing on the unreal Britain of The Aven
Post a Comment
Read more 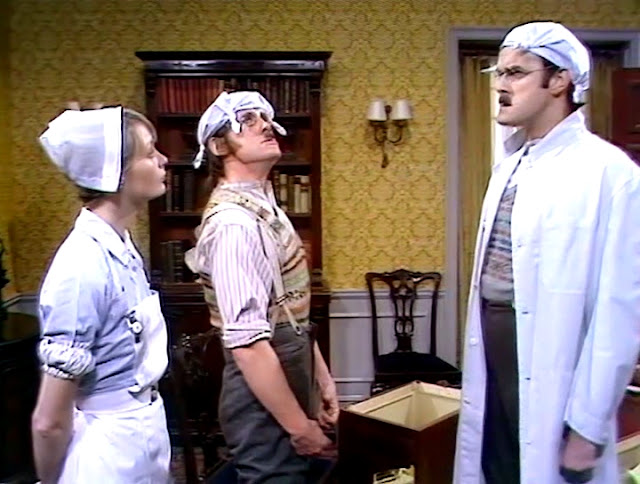 For some strange reason I have managed to blog about TV for this long and not once blogged about Monty Python and this is an omission which requires immediate correction. I have commented recently on the energy and youthfulness of TV comedy before everyone became very cynical in Thatcher's Britain, and of course Monty Python is no exception. The Pythons seemingly took whatever came to mind and made it hilarious. Their humour was not without relevance to the events of the day and the war against pornography referenced here was of course a real war being waged at the time: regular readers will have noticed how often Mary Whitehouse is referenced on this blog. If you want the other side of that story I would recommend the film about Mary Millington which I have recently watched with much enjoyment. The other thing the Pythons bring home is how the world has changed in the intervening decades. Part of this episode mentions Britain and trade with other nations, and of course the sev
Post a Comment
Read more
More posts