Play for Today: The Hallelujah Handshake 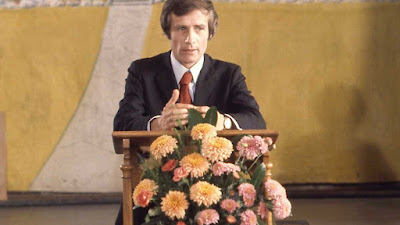 You can find this play on the Alan Clarke at the BBC Dissent box set. I think it's also on Prime and several other places. I had this on a shortlist of possible orphans until I found it isn't, but it's incredibly compelling so will form another breather from my orphaned episodes posts.

Unsurprisingly with a star director, it's been extensively commented on already, so I will just point you here for a sensible essay before getting on my various hobby horses and commenting on the bits that take my fancy.

The first thing absolutely hits you between the eyes. This is a play made in 1970 about a man who just walks into a church, asks to join in by helping with the children, and how the situation unravels as it becomes increasingly clear that he hasn't exactly been truthful, and his motives are decidedly suspicious. His wish to work with the children was among the first things he said to the minister and what is so striking is that fifty years later, surely doing that would make the minister at least ring safeguarding if not the police! It absolutely beggars belief that this could happen and shows how much the culture has changed.

The subsequent actions by the minister and members of the church (and what happens when he jumps ship to the Church of England) show very clearly the very difficult dilemma they face in dealing with a liar who is over interested in children. Again, with the benefit of hindsight we can see how the approach churches have tended to take to potential abusers and other criminals, has been utterly mistaken. However in this play the motivations for both approaches are fully played out in discussion. This is a very clever play and very prescient way to tease out this dilemma for the viewer.

It is clear that the church is well intentioned, and they are particularly concerned that he could end up arrested if in an unsympathetic environment. The Methodist minister's view is cleverly contrasted with the opposite view taken by the Anglican priest. It is while attending the latter's church he does actually get arrested and the dilemma is partly about how much you save people from themselves.

At one point the minister comments that they thought he had a 'genuine Christian experience' and that was why they were so kind to him, although he comes to the conclusion that the experience and other aspects of human interaction are not real for the man, who I will call Williams, although he carries a couple of other names during the course of the play. In my opinion this is the right conclusion to reach and this play gives an accurate representation of what it is like to have quite a marked personality disorder. This is actually why the minister is a bit suspicious to start with, Williams's inability to feel emotion the way other people do, makes everything he does come across as slightly wrong - he is over-keen and in every other setting his response is just wrong. This will purely be because he is doing what he thinks other people would do but doesn't feel emotions or have a conscience in the same way other people do. This is one of the best portrayals I have seen of what it is like to have a personality disorder, and I can't over stress how difficult it is to get it right.

This is really a problem for society more than any church as here. These people are people but they don't relate to others in the same way, and as in this play there are dangers for others, emotional if not criminal. Our society hasn't come up with a way to allow these people to live the best life they can while controlling the havoc, as here, they create around them. A major problem is that many people simply can't believe people like this exist and so are unprepared for the possibility that they are dealing with a conscienceless, affectless person. Churches don't seem to realize that they're magnets for these people because they provide a sense of identity, belonging and there's an obligation for them to forgive you.

One of the things I find most striking is that the church members refer to him throughout as a boy (despite looking around thirty) and at one point one of the church members comments that he had become a human through their church. She thinks that now he has left she doesn't know who or what he is. I actually find this very disturbing. Horrifying. He was always definitely a human and an adult so did not need the church to create this and I'm horrified at how this suggests she sees him.

We're probably most intended to look at the portrayal of Williams however the portrayal of the church is not without its interest. I keep reading in other people's reviews that the church goers are sincere in their church going but I honestly can't see this. We get interesting insights by the device of hearing their unspoken thoughts and some of them are absolutely bizarre. Why go to church if all the time the minister is praying you are casting doubt on what he's saying? The members of the church even refer to the minister trying to drag people in. To me they come across as much more cultural church goers and I'm sensing more convention than commitment going on in their portrayal. Ironically the church most of the play takes place in is Methodist and they have been the UK's fastest declining denomination for decades so the packed attendance shown here another way things have changed in the past fifty years.

There is a scene where Williams reads the Ten Commandments to the Sunday school and treats them to the most histrionic reading of them ever. It reminded me that when I was a child and introduced to them my first thought was that I was unlikely to murder anyone and adultery was unlikely to be a problem in the near future! This play does, to my mind, underscore the unlikely nature of the commandments as an ethical basis. Why on earth do churches treat them as so prominent and especially with children? And that's without the fact churches soft pedal the other version with all the instructions on how to treat your slaves!

This is an excellent, thought-provoking play. I have two favourite lines which look even more peculiar put together:

Why didn't he go to the pubs for the society of queers?

That lad'll have to be cloistered.

Note for if you are understandably distressed by depictions of abuse: the mere mention of abuse got this play a 15 certificate in the UK. The subject is handled very sensitively and his potential to abuse is clearly suggested but he doesn't actually abuse a child in the play. The crime he ends up in prison for is stealing. There are, however depictions of playing with children and touching children intended to suggest over-involvement and what we would now call grooming.