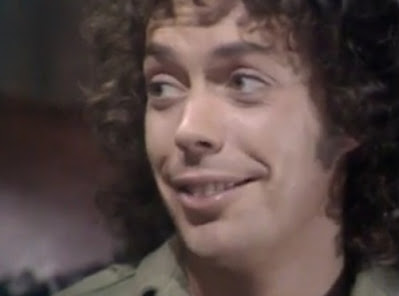 You are probably as surprised as I am that an episode of this show should appear among these orphaned episodes, since much of the surviving show has been released by Network. But I'm very much afraid I don't think this one will probably be released. It is in a couple of places on YouTube and has been streamed by Talking Pictures TV (don't tell me if it has been released, it's given me real trouble).

I formed this opinion in the first minutes because the use of the n-word, and not in a derogatory sense, suggests this show may have some difficulty transitioning to today.

You all know how subtle I am and don't speak my mind but I think the other reason this one might not see the light of commercial day is that it's not very good. God I feel terrible saying that but we're not talking quality here, it feels like this play was a good idea but went horribly wrong along the way. I'm not breaking my own usual policy that I will not write here about absolute rubbish, because I still think this show has enough going for it to make it worth watching, and I'm not sure of my initial impression about its quality.

I have also had some difficulty writing this post because beyond some appreciative comments there isn't much about this show online and I like to see what I think in the light of what everyone else thinks. Since there's so little, I'll have to do a little description at least. The show is about Clive and Shirley Young, an actor and a teacher. The blurb for this show all over the internet says that they are comfortable and prosperous but that clearly isn't the case. They start in a scene at a protest and she worries that he sounds insincere when interviewed for the TV, and is informed when she asks, that the truth is never edited so the take where she thinks this will stand. The play is about the events afterwards when they invite an American, Mik, played by Tim Curry, and the events after he moves into their house. He actually uses the phrase cinema vérité which was going round my head, to describe the film he is working on. The relevance to the show is clear from the definition of this cinema school:

cinéma vérité, (French: “truth cinema”), French film movement of the 1960s that showed people in everyday situations with authentic dialogue and naturalness of action. Rather than following the usual technique of shooting sound and pictures together, the film maker first tapes actual conversations, interviews, and opinions. After selecting the best material, he films the visual material to fit the sound, often using a hand-held camera. The film is then put together in the cutting room. Source

There is an ongoing theme of comparing the US and UK and really not in positive terms. Clive has a thing for New York and all things American, so of course he's all over Mik like a rash. Shirley, on the other hand, sees the US as a place of utter degradation, you can't do anything good there and nothing good can come from the place. Clive describes Britain as an island with an island mentality. With the best will in the world it's fairly clear from the start where their marriage is destined!

So what the show is really about is of course the truth. I think that is where it rather goes wrong is that it isn't decided which side of the argument is true. If you watch this as either a British or US citizen it's highly uncomfortable to come down on either side.

The way the truth comes out is through the developing events with the ongoing theme of performance and how the camera sees things. I'm going to be fairly frank here and give my considered opinion that it comes across as abstract philosophizing about some rather abstract stuff. There are attempts to deal with some more concrete subjects, such as how black people are treated, but it's all done in an overly arty way.

Because there is so little about this show I have no idea whether this is the case but there is a possibility that it's being overdone and over-acted on purpose. If you throw together a bunch of arty types discussing abstract stuff that is fairly alien, make Tim Curry do the least convincing American accent ever, bring in cinema verite, and frankly you're talking about a caricature of the art world. And that's even without mentioning the character of Barbara (there are other weird characters but she stands out), but that is mainly because I'm speechless. She refers to becoming friends with her breasts as a result of group therapy, which is either a British caricature of Americans (similar to ones in Absolutely Fabulous) or a British writer stereotyping Americans. While we're on the subject of her breasts, they are shown to full advantage. I feel she must be approaching a J size cup, and I'm no expert but I have a gut feeling that no woman thus endowed would unironically wear a halter top, for obvious reasons. I'm giving these examples because I don't want to say it's poncey overdone rubbish if it's deliberately overdone poncey rubbish intended to make fun of arty cinema types and I don't know.

Another example of why I'm not clear what this show is getting at is the American slang that's used. It just doesn't feel right but I don't know. I looked it up and discovered that the use here of 'rapping' is real US slang for talking to each other. There is one scene where Tim Curry says, 'I hate heavy scenes,' and I really can't tell whether this is authentic. It feels like a caricature. In fact it feels like Neil in the Young Ones.

Finally, I have no way of knowing whether this was intended but another thing which makes this show uncomfortable is that although there are indications that black people are treated badly, the scenes from the finished film we see could be interpreted as meaning that the supposeded degradation of society is the result of immigration of black people.

A perfect example of why I don't know what to make of it is this song sung by Clive and Mik, to give you a taste:

My favourite line: 'Excuse me, but you're a homosexual witch, your viewpoint is somewhat special'. This may also show there are layers of weirdness I have left untouched.

So my verdict is I'm confused about what to make of this. It's either a pointed caricature of arty people, a warning about society or else utter arty farty fluff. It can't have confused everyone so much and must have been rated at the time because according to this site Curry got his role in the Rocky Horror Picture Show on the basis of his performance here and I'm utterly perplexed.

I would be pleased to hear what people make of it (and will probably find I've missed the point completely).