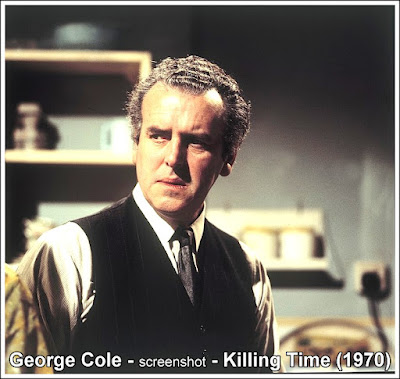 Menace was a series of plays intended to keep the viewer on the edge of his seat, which ran between 1970 and 1973. It is currently missing believed wiped except for this episode and another called Man With a Mission, both of which are available on YouTube. The only commentary online is by people who saw it the first time round or on its only repeat and who are gagging to see it again if they could. There is however an episode guide here. I'm surprised to find writing this series of posts about odd available episodes is an emotional rollercoaster. Although I am very happy to find that shows I have never heard of keep popping out there is a genuine sense of sadness at how much no longer exists.

After my last post about a show set in a boarding house, this is about Douglas Willett, a middle aged lodger with a family of two parents and grown up son. I'm going to be very frank as I always am and say that my sympathies are more with Willett in this situation. Years ago I was a lodger with a couple who actually separated while I was living in their house, and not amicably. Every day I would go to work and my colleagues would ask what happened next, culminating in her heaping up his clothes outside the house and setting fire to them, before threatening the neighbour with a carving knife when he tried to put the fire out.

None of that is really a propos the plot, except that living in somebody else's house is never easy. Here the day by day details are perfectly built up and successfully build the tension. It doesn't give away what is coming and ultimately doesn't really explain why Willett does what he does. If you love the type of horror film where the tension is built like that you will definitely love this show. It moves at the normal pace you would expect for 1970s TV. The picture is apparently unrestored but not at all bad, certainly better than a lot of VHS recordings. The show is rather unusual in that there is no incidental music, so the whole scene and mood is set by the picture, the action, speech and the viewer's imagination. In that it is utterly successful in doing what it sets out to do.