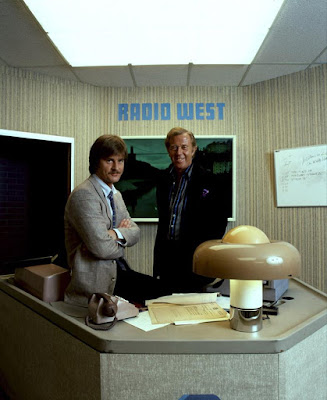 Apologies for the hiatus in posting, but fortunately I am on leave again so time for some quality TV and some blog posts. I have had Shoestring on my list of shows to write about here for ages.

Usually when I write about 1970s shows I find myself commenting on how dreary the 70s were. This show managers a genius combination of managing the nightmare scenarios of the 1970s with certain dreamy aspirational qualities, which were later taken into the series Bergerac. For example what is not to love about working as a private ear for a radio station? By contrast Shoestring is doing this because he became mentally unwell after working as a computer technician. I believe the 70s to the 1980s were the last time when being a DJ was an aspirational thing, since I have read that it was in the 90s it became a lot about marketing and record deals, leading to it being an increasingly stressful occupation. In retrospect the hero DJs of the 70s have often been investigated if not convicted for sexual activity with underage fans.

This is the first episode which shows how shoestring becomes the fictional stations private ear, and it does draw the seedy underworld of the 1970s, because it is about a prostitute who kills herself on the beach, having stolen a Rolls Royce belonging to a DJ at the station Shoestring ends up working for.

Shoes is an endearing character, one of the things I like best is his habit of drawing sketch of the persons he is talking to leaving sketch with them, which are sometimes shows the mood or something else they have not betrayed in their speech. Obviously this doesn't always go down very well with people. He is also upfront with people about having a "breakdown", and he can give the impression of being too open with people. This hides his power of thinking. It is also endearing that he has a boat to retreat to, since that is something of an exit fantasy of my own. The actual boat in the series was in London, although most of the location shots are in Bristol. It will come as no surprise that I love the clothes, interiors, and cars in this show!

If you wanted to approach this show as a pure whodunnit, I think you would be disappointed. The plot is probably deliberately rather convoluted and is intended to create a sense of uncertainty about what is happening. This it certainly succeeds in. He's part of this shows genius that it could also be watched as a entertainment about shoe strings situation. Otherwise I am finding it very difficult to think of any major criticism, and normally in that situation I look round on the internet for criticism but there isn’t much comment on this show in the blogosphere so it escapes scot free!