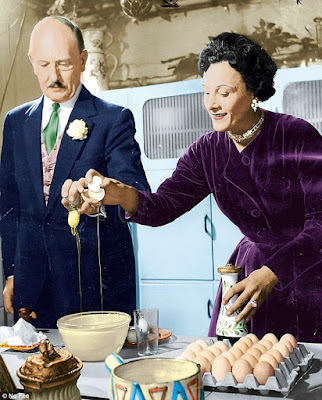 Today a post which I wasn't sure would really fit the description of this blog, and this lady may not be that well known abroad. On reflection I don't see how I could have had any doubt, since the country's first celebrity chef, who cooked in evening dress in The Royal Albert Hall, was a serial bigamist, invented her own past, cooked food dyed blue and green to look like trees and all sorts of strange things, publicly roared at her common law husband and assistants, and entertained the nation with her cookery programmes... Well if that isn't Cult TV I don't know what it is!
I will try to stick to the TV I promise, and not get too caught up in her scandalous private life, but I must just say that Fanny Cradock with her husband Johnny was also the real person behind the character called 'Bon Viveur' who has a column in The Telegraph for years and years. I have found some reflections by her successor in the same role:

Trawling the Telegraph’s archives, I can’t get enough of forthright columns. Like me, she loved hotels and inns, including a number of the same ones, and she loved travelling. But she also cut to the chase and had a way with words and a bruising wit to which I can only aspire.
She pulled no punches on a trip to Winchester in 1950: "We slept in a mausoleum-like bedroom plunged in 25-watt Stygian gloom. The bed tapestry peeled, as did the ceiling. The straw bulged from the palliasse under our limp feather overlay. The dust was as thick as the breakfast tea, the chamber as chilly as our toast." She was no less kindly to the town itself: “England should pay more attention to this historic town which draws so many tourists. Its restaurants and hotels should, in their turn, pay more attention to Englishmen and tourists."
On the English Riviera, she resorts to capitals to vent her spleen: "I’VE FOUND SOME SCANDALOUS PLACES with lukewarm bathwater, insufficient toilet arrangements, annexe rooms devoid of bedside lighting…" The list of complaints goes on.

The directness of her descriptive writing means that it is admirably unpretentious. How can I not love her, long to have met her, when she writes, in 1951, about my own beloved village, Beaulieu, in Hampshire: "The first crisp tang of spring has made last weekend notable. I have seen sunlight glinting on the Solent, stippling the tree-trunks in the New Forest and silvering Beaulieu River."

And when she is satisfied with a hotel, she makes her readers long to go, as every good critic should. Arriving late and unexpected at the Master Builder’s, close to my house, she reports: "'We can’t do much I’m afraid', said Mr Fry, who runs the hotel with his sister, 'but you’re welcome to what there is.' At 8,45, I sat down to hot gravy soup, beef steak and kidney pie, stewed fruit, custard, two vast slabs of cheese, all followed by good coffee, for 6s."
Reading that, and all Bon Viveur’s reviews, subtitled In Quest of Pleasure and illustrated with photographs and useful maps, it’s hard not to feel both deep nostalgia and deep regret for the crazy pace of life today. There’s irony though. Her evident enjoyment of plain English fare comes from the TV chef that espoused food colourings, piping bags and recipes like Jelly a la Zizi (layers of different coloured jelly) and Green Cheese Ice Cream. My mother only went so far with Fanny Cradock – she preferred Constance Spry and Elizabeth David.

As it has done for me, the Telegraph gave Fanny and Johnnie the opportunity to travel offshore and her articles are credited with inspiring many readers to take their first tentative steps abroad. They went to Goa, Barbados, Corfu (‘In the Durrell Country’), Ibiza ("of all the Mediterranean coast this rates the highest with us for an unsophisticated holiday"), Spain, France, Italy, Scandinavia and many other places. Wherever she reported from, she had a knack of conjuring up the destination in a few well-chosen words, at the same time as giving straightforward practical advice. In 1952 she wrote ‘Two Weeks in Denmark on £25’ (£562.50 in today’s money) and 15 years later ‘Getting a Fortnight on the French Riviera out of £50’ (£830). At Reid’s Palace in Madeira, a hotel I loved when I reviewed it for its 125th anniversary in 2016, she usefully informed her readers in 1953: "Anyone able to spend more than £25 on a holiday can do so legally at Reid’s. As it is British owned, a Bank of England concession permits payment from foreign currency allowance for only part of your hotel bill. The balance is paid in sterling in England before departure." People may scoff, but all the travelling and hotel reviewing is actually hard work. "Bon Viveur", reads a footnote in 1951, "is taking a well-earned holiday after a strenuous but enjoyable year in the quest of pleasure on readers’ behalf." She was soon back in the fray, travelling to Majorca ("the nightlife, which I dutifully probed on your behalf, is in the open air…I danced to a good band for about an hour"), Denmark, Holland, Jersey, Portugal and the Tyrol. Source

Something I am always banging on about here is the post-war aspiration to sophistication, which in the tv programmes we watch is usually embodied in foreign travel to the sophisticated places of the time. That said if you think about the Avengers, and think about Tara and Steve having dinner in a field accompanied by the obligatory champagne, aspirations to sophistication were no less embodied in the food of the time, and before Delia Smith, Fanny was the inspiration for the food. It is high time I stopped messing about and actually introduced you to her in person.
I couldn't resist starting with cooking in the Royal Albert Hall. By gas, of course. This is the earliest clip I have managed to find on YouTube and the snobby, acerbic personality is already there in its fullness. Nobody had better be rude about her, because you're talking about the woman I love!
I particular theme which recurs in her programmes of thinking of someone you don't like when you are beating something.
The video above is the one which I think best expresses her suitability for a TV blog, particularly this one, since the celebrity TV chef literally steps out of a TV set which is in the kitchen and revolutionizes the poor housewives life.
A stock part of this was the setting up of Fanny as a character to be looked up to, and whose sophistication was to be emulated. She and Johnny taught themselves to speak in received pronunciation, and while they did genuinely have sophisticated foreign travel under their belt, hints of a far more upper class background than they really had were continually dropped. By the 60s Fanny had become part of society.
I particularly like her shows from the 70s about a cooking for Christmas, because she drops even more hints about her family.
'I'll go right orff you'!
I also love the idea of being invited to a cheese and wine party!
Fanny's television career was brought to an unfortunate end after she was rude to a member of the public, and her place was taken by less old-fashioned seeming cooks. She remained and remains the national consciousness though.
Yet more facets of this remarkable character which I have not covered here are her life as a door to door saleswoman of vacuum cleaners, her recovery from cancer through Faith healing, her life as a spiritualist and her series of novels and other books.
She has recently had a Resurgence in popularity you can find a blog where are recipes are cooked in vegetarian versions here.
I hope the videos play abroad, and as Johnny once famously ended a show: May all your doughnuts look like Fanny's!