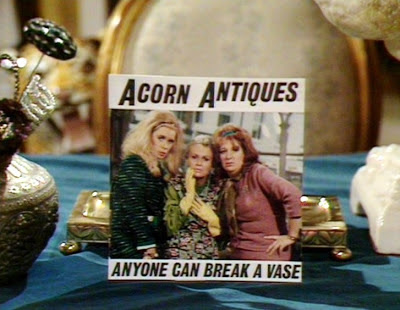 I have written about a number of funny programmes here, following my usual policy that since this is a blog it will be about what I am watching and also will not include programmes which I do not like. Obviously Acorn Antiques makes it onto here because it is a programme I like very much, although I am finding it very difficult to write about it because of the complex nature of the programme and also my reaction to it.
For a start, Acorn Antiques was never intended to be a show in its own right, although you can now get it in its entirety on a DVD. It was intended to be a segment in the show Victoria Wood as Seen on TV. I see that this ran from 1985 to 1987 and I remember it with great fondness. The wonderful Wood also unfortunately died of cancer earlier this year, which gives an extra sadness to the fact that I have found Victoria Wood as Seen on TV very difficult to watch at this length of time. I found that it had not worn well over the years. This is not however truse of Acorn Antiques, strangely.
Victoria Wood as Seen on TV was definitely intended to be funny, and of course I referred to funny TV in the first part of this piece, and true enough Acorn Antiques makes me laugh out loud. However there is another element to it which is of particular interest to the cult TV fan. I see that Wikipedia categorises Acorn Antiques as a parodic soap opera, of which there can't be that many about.
Acorn Antiques is a deliberate parody and comment on some of the most famous British TV shows of all time. The obvious contender is the wonderful Crossroads, broadcast originally from 1964 to 1988, and made at the recently-demolished Broad Street studios up the road from here. This is the reason for Mrs Overall's exaggerated Birmingham accent. It is also the reason for the parodic poor production values, since Crossroads was notorious at the time for wobbly sets and so on. Crossroads was immensely popular at the time, and its lengthy run and complicated relations between the characters are referenced repeatedly in Acorn Antiques.
Reference was also made to the radio series Waggoner's Walk, which I am afraid I had not heard of until I started reading around for this post. Contemporary TV soaps such as Eastenders were also parodied. In a very post-modern way, Acorn Antiques is in a sense the formula of every soap opera ever written. In Acorn Antiques, the medium truly satirises itself and becomes truly reflexive. All of the devices used by popular long-running TV shows are used, such as tours of costumes, a release of a record, and a behind the scenes documentary.
The wobbly credits don't detract from the fact that Acorn Antiques is actually played by some of the cream of TV comedy. Julie Walters (incidentally I see that she was born in Edgbaston so that would explain why her Brummie accent is so good) has of course had many 'straight' roles, but performs wonderfully in the uncharacteristic role of Mrs Overall. I have a bit of a thing for Celia Imrie, and her rather superior mein suits the character of Babs down to the ground. I am surprised to rea, though, that she was treated for anorexia nervosa at the age of fourteen by the contemporary treatments of ECT and Largactil, and the doctor concerned still features in her nightmares.
At this stage of a post like this I would normally comment on the production values and reproduction of the show. Acorn Antiques of course has terrible production values, and that is the whole point. The camera angles are all wrong. Cues are missed. The edges of sets are visible. What can I say... As usual none of these things is a criticism!
I would recommend Acorn Antiques as viewing to any of the readers of this blog. And if you happen to be from Abroad, it will acquaint you with some of the televisual treats you luckily missed in the 1970s and 1980s by parodying them.
80s TV Acorn Antiques The Comic Strip Presents & Others