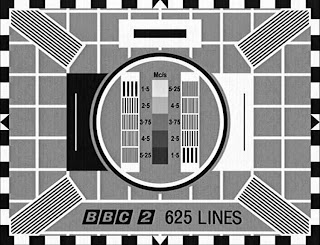 To my great sorrow, I had to have my poor old ginger tom cat put down on Thursday. It wasn't exactly unexpected but it may cause a hiatus on here, since I'm having my house (which has been a millstone round my neck for years) auctioned on 8th December & therefore have to find somewhere to rent pretty sharpish! This will either cause my absence here or cause a proliferation of posts as I try to escape from the stress of flat hunting into the world of old TV.
Incidentally I've been reading about the classic UK test card in an effort to find an illustration to this post (the illustration isn't it, & I would refer you to http://www.theguardian.com/tv-and-radio/shortcuts/2012/apr/22/the-test-card-girl-and-clown where bothe original can be found & this quote:
'In the mid-70s, there were only three TV channels and very few programmes during the day. For long periods there was nothing but trade test transmissions, largely to enable TV shops to get the best possible picture. These transmissions were made up of the test card, with its instrumental soundtrack, and the occasional test film – such as The Home Made Car, a 1963 Academy Award-nominated short. During the school holidays, or on Saturday mornings before your parents were up, there was little else for bored kids to do but watch the test card and transmitter information – the music and the images became as embedded in the minds of a generation as the Monkees and the Robinson Crusoe theme.
[...]
'The most iconic image, introduced in 1967 with the advent of colour TV, was called Test Card F. Its designer was a BBC engineer called George Hersee and, for a dummy run, he had included a picture of his eight-year-old daughter, Carole, at the centre of it. The BBC decided that replacing Carole's picture with an adult model was too risky – they needed something timeless, and 1967 fashions weren't exactly built to last. So Carole went into a photographer's studio: the result was the familiar image of a girl with an alice band, playing noughts and crosses with a rather terrifying toy clown, surrounded by mysterious test graphics. Hersee was, unsurprisingly, teased at school and, to her discomfort, the image was used on a daily basis until 1998. Now living in the New Forest with two daughters, she can claim to have had more screen time – around 70,000 hours – than anyone else in British TV history.'
------------------