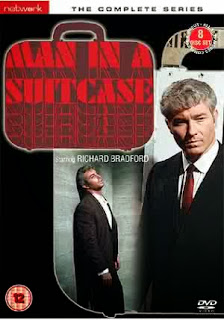 I have had the box set of Man in a Suitcase for some time: I bought them on spec from ebay, because it's one of the series that's always mentioned in the same breath with all the other TV series that you'll read about here. I have been watching the episodes in a rather desultory fashion on & off, but this series has come up in the cult TV blogosphere recently, & I thought I'd stick my neck out.
There's one thing that I'm finding repeated all over the internet about Richard Bradford, that he is a method actor (for example it comes up on the wikipedia, tv.com & amazon.co.uk pages referring to the show rather than Bradford himself). This is where my problem with this show begins. Method acting refers to a collection of inward techniques, pioneered by Stanislavski, where the actor creates the part within himself, as opposed to the purely external techniques used in classical drama training. And here's the nub: I get suspicious when an actor's technique is talked about too much. The whole point of acting is that the *part* is the thing the viewer sees, & all the great actors can project a part in such a way that you don't notice the acting. I am not sure whether I am referring to Bradford's actual acting or the hype around the show.
Because there is something wrong with Bradford's performance, for me. After much thought, I've concluded that he's not pissed off enough. For a man who is supposed to be scraping a living from his wits after a great injustice by his own country, he is remarkably equable. If you want to think your way into his part you've got to have elements of a grieving process - including anger, & so on.
For some reason Man in a Suitcase reminds me of The Persuaders! I feel this may be the...I suppose it would have been called Pan-Continental at the time - setting of the show (incidentally I remember my mother getting terribly excited about us going over to what she called 'continental quilts' - it is only afterwards I've discovered Terence Conran is credited with the introduction of the duvet to France).
The plots also strike me as somewhat generic. I have watched most of the series now. I'm afraid it has failed to grab me. Many of the TV shows I talk about here grabbed me on first viewing. I'm ashamed to say I can't remember the plots of the episodes I've watched. I have also recently watched through Jason King in the same manner & pace (usually while eating or doing something else), but I can remember the plots of Jason King episodes. The more colourful figure of King has made more of an impression.
None of this manages to square my impression with the rave reviews this series gets on amazon.co.uk. And they really are rave reviews. However I would note that many of them are by people who either watched Man in a Suitcase at the time or would have liked to. I wonder whether it hasn't travelled as well as some of the more outlandish TV series of the time.
Or it may just be me. I certainly *ought* to like it, but I have a feeling this box set will be in the next bag of stuff, along with Hazell, that I sell to Cex.
------------------
60s TV ITC Man in a Suitcase