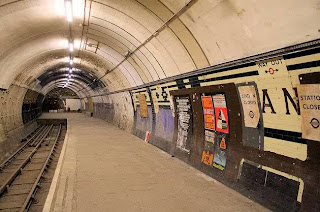 I was surprised to find, on checking just now, that Department S only consisted of one series, when I really thought it had two. I'm not thinking of Jason King as a second series; I realise I'm thinking this because the way the DVDs in my boxed set are divided into two sections. I'm also thinking it because of the nature of the programmes: there is an assurance about the later episodes, that show the series had become established, & that is no more the case than with Last Train to Redbridge.
One of the things I find most interesting is the way the episode looks. In terms of the choice of images it has much to interest, views are changed quickly enough to maintain visual interest. The choice of what you see maintains interest as well - I always say you can't go wrong with the appearance of a coffin on the telly - it's one of the more obvious symbols! In this episode the fact the visuals are slightly overdone is no shame - the baddies look like baddies & can't be mistaken for anything else.
Another image it's difficult to fail with on television is a train, in this case a tube train. In fact this episode presses a real button for me by featuring one of the famous 'ghost' London Underground stations. It is one of my great sorrows that I've never been in one. Even the story of the old posters is echoed in a relatively recent unearthing of intact old posters at Notting Hill Gate underground station. If you're interested in this I like this BBC article as an introduction: http://m.bbc.co.uk/news/magazine-25576814. Like many things formerly hidden, the online urban exploration community has allowed us to see these stations without the attendant danger!
Apart from the bound-to-succeed settings, the actual sets are fairly standard late-sixties sets, which come across as rather drab. In fact in many ways - perhaps because of the London setting & the bizarre plot - this Department S feels like a late Avengers episode.
Although, I'm telling a lie there. The sets may only look drab against the fabulousness that is Peter Wyngarde: no Avengers set ever had to compete with that. I must stop being catty here - I think it would be easy to criticise how over the top he is, & so miss the point that Department S is supposed to be (in the slang of the era) 'way out', & so a way out character can be excused! One of the things that set me off rewatching Department S was my godmother telling me, somewhat red-faced, that she had a wild crush on Peter Wyngarde in the seventies, which she had to admit was rather ridiculous in hindsight. In this episode he actually shows his true mettle as an actor: with real versatility he does playboy, author, drugged abductee, in quick succession.
I suspect I'd avoided watching Department S again for fear of wearing out their repetition value, perceiving them as somewhat ephemeral fripperies. I think I've underestimated their quality - certainly after repeated rewatchings of this episode I'm still finding interest in it . In fact I'm not really 100% au fait with the plot yet, so it may even be somewhat over-complicated for a bear of little brain. Nonetheless I would give this one my stonking good television award, for plot, atmosphere, characterisation, &, at this distance of time, period detail.
------------------
60s TV Department S ITC Petunia Winegum