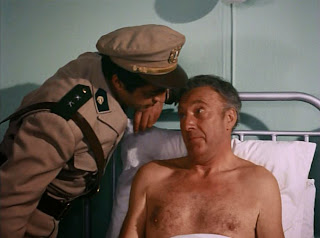 This Department S first & foremost at this length of time, hits me as a real blast from the past. I've only ever seen a couple of episodes of Jason King, the successor to Department S, & for no reason I could fathom didn't take to it, but this episode of Department S actually seems to press some of the same buttons. It does this by accessing the same luxury zeitgeist that so many sixties series tapped into. I like to think of the show's contemporary viewers watching the show in a flat (already a decade old, though) in Park Hill in Sheffield, or the local example would be the Castle Bromwich estate in Birmingham. Before these developments went horribly wrong, there was a real sense that things would get better, & that slum living was over once & for all for the inhabitants of these palaces. They would also watch a film in the city centre of an evening, & could eat continental food - even I was taken to Gino's Omelette Bar in Birmingham as a child. All of these things seem so normal to us today that it is easy to forget the newness of the post-War jet-setting aspirations. This episode furthers the aspirations by including opera throughout, a restaurant critic, & foreign travel at the drop of a hat. This was, of course, the heyday of Fanny Cradock & Egon Ronay - am I imagining it or does Sinclair bear a passing resemblance to Egon Ronay?
If it taps into post-War British aspirations, & sensibilities, it also taps into the contemporary fears. Thalidomide had made the medical profession a fearful thing: given what it can do by mistake, imagine what it could do if it set out to make people, say, forget things! This is very much the impression of medicine also given in The Prisoner, ironically at an age when psychiatric medications were taken like water for any small anxiety. 'Get Bridget a capsule, Woolf,' was very much the order of the day.
There are some of the familiar faces that I normally dislike in this one, including Richard Caldicot (pictured, trying to explain something he's forgotten to Paul Stassino). However, David Sumner plays Dr. Wolf. I recognise him from two episodes of The Avengers, one in which he plays a scheming boyfriend, & another in which he plays the victim of a rogue interrogation. Neither could have prepared me for the way in which he manages to appear both incredibly young & terribly psychopathic in this one. He really does act an excellent, cold, killing, calculating, conscienceless, baddie here, to the extent that even I don't mind that I recognise him.
Otherwise we're almost, but not quite in Diabolical Masterminds territory here - the difference being that the location for the masterminds in question is somewhere exotic rather than a decayed stately home in Dear Old Blighty. Annabel requires the necessary kink. Plus Jason King is an interesting peacock-like variant on Steed appearing without warning at the crucial moment & deflecting disaster. All in all, an excellent spy show, drawing on many late sixties aspirations & fears, with Avengers overtones, & full marks to David Sumner.
------------------
60s jobbing actors Department S ITC Petunia Winegum Topless on TV