Allegory in The Prisoner: The General 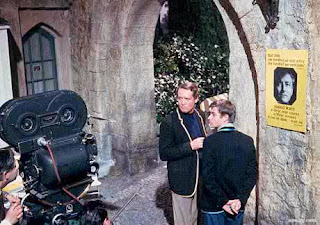 Oh this episode is so deeply allegorical, it just does on for ever. Rote-learning, indoctrination, hero-worship, institutionalisation, power in institutions, the power of accepted 'facts', loyalty, inner resourcefulness, it's a bit difficult to know where to start. My opinion, though, is that there are several different depths to the allegory here, & the obvious one (which I'll take first) isn't necessarily the main meaning of the episode, bearing in mind that the point of allegory is that one thing stands for another.
The most obvious allegory here is a warning one. The Professor represents education, the putative 'General', military force, & the episode stands as a warning of what can happen when these two forces come into an alliance. This idea is so obvious on the surface of the episode that I simply cannot believe this is the point at all. For a start, the education portrayed here isn't like what proper education ought to be at all. At the risk of being a bit Jean Brodie, proper education aims at the transformation of the person by the use of faculties - usually thinking - rather than the mere absorption of untried & unprovable 'facts'. So on this level the episode is warning against the corruption of these two forces of education & militarism.
Both the Professor & the General stand as flawed, failed, or compromised figures in their respective fields. The General less so, because he isn't seen, but that is clearly necessary to the outcome of the episode.
In fact allegorically this episode has much to provide material. The sands can represent the idea of being lost amid the pressures of a corrupt system. The top-hatted & dark-glassed council can represent the faceless, spineless bureaucrats of the world who are either leaned on or are feathering their own nests. The busts can represent either the artifice of the system as portrayed in this episode, or could be taken to represent a spark of originality & independent thought in the midst of full-scale corruption. The fact that the General turns out to be one of the marvellously monolithic computers depicted in the TV programmes of the time picks up on a contemporary fear that often comes up in this blog.
The General is allegorical for the fear of the machine taking us over. Since nearly fifty years later the application of computer intelligence is predictive texting that sends people nonsense messages, the very real fear of the time seems to have been groundless. This is the only way in which this episode really falls down for me: The Avengers remains timeless because it tried to be in a non-specific time, but 1960s TV that was very time-specific has dated terribly. The tape recorder may be taken as allegorical of a correct & proportional use of technology.
But the real allegory here is a hint of the wider meaning of the series. The 'Why did you resign' questioning of successive Number 2s is a clever distraction from the important question in the series, which is Number 6's repeatedly asking 'Who is Number 1?' Hints are given as to the answer to that, & there's a whopper here. Number 6 being able to ask the one question the General can't answer is the hint that actually he holds the answer inside himself. No matter that any A-level philosophy student can make a suitably trite answer to the question of 'Why', the allegory here is of Number 6 as the answer. He is also the allegory for man-against-the-machine, for genuineness over cloning, indeed the answer to all the issues otherwise raised in this episode.
------------------
60s TV Allegory in The Prisoner ITC The Prisoner