Doctor Who: The Talons of Weng Chiang Episode 1 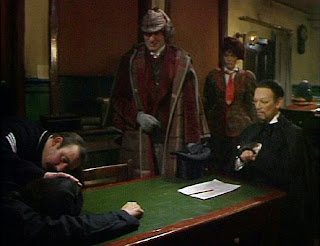 I have a somewhat ambivalent relationship with Dr Who. I've watched a lot of it over the years - the doctors when I was growing up were Tom Baker & Peter Davison. I've watched a lot of David Tennant, some Matt Smith & all off Christopher Eccleston. I *must* have seen Colin Baker episodes, but have no recollection of them now. Considering I've watched quite a lot of the canon Doctor Who seems to have made relatively little impression on me, I'm certainly not a massive fan in the way I would be a fan of The Avengers, & I can't think why. I remember liking a lot of the Who I've watched. I was surprised to watch some early episodes (blogged about here) & really not be impressed by them. Unimpressed to the extent that I did not buy the Lost in Time boxset of remnants when I saw it in Cex; I would never be a Who completist but I have all existing episodes of The Avengers. I also recently bought Ghost Light, having looked at it in the BBC shop & thought it would be my sort of thing, but I found my attention drifted. I tried to watch it several times but there was always a point beyond which I wondered what was going on.
This Doctor Who adventure comes as a pleasant relief, then. I bought it purely on the basis of the rave reviews it gets, somewhat nervously & hoping I wouldn't be disappointed. I'm *not* disappointed! To be frank, it's on to a winner, since any mystery of any sort, even a sci-fi one, can't really fail if it takes a theatre & Victorian London setting. In this of course, it is - not influenced or derivative exactly - but makes reference to lots & lots of cultural icons.
My main criticism is Mr Chang. Even in the 1970s the image of a Chinese person that he projects was just plain wrong. He is even placed next to genuine Chinese people, which shows it up even worse. I do however feel there is a possible way to read this. The episode begins in a theatre - the theatre is symbolic of everything being artificial. It is plain that Chang is such a caricature of a Chinese person that he gives me an impression of someone pretending very badly to be Chinese. If it is intended to cast suspicion on Chang, there would be no better way. In one sense this aspect of this adventure draws on British racist attitudes towards Chinese: frequently used in the cinema of a previous age, but it jars now & was increasingly unacceptable 40 years ago. I would note that criticism of Chang is fairly universal, with no implication that his badly-acted role is deliberate. Other than Chang I literally cannot fault the acting. Costume, personification, acting, all perfect.
The script is excellent. It's not for nothing that this is one of the Doctor Who's that does get quoted; its exchanges are worthy of Noel Coward!
-Have you been drinking?
-Not a drop, Sir.
-Then you should start now.
Nor does this adventure fall into the trap of merely being a conventional Victorian murder mystery (similar to what Black Orchid does): the culture clash of Dr Who and Leela with the Victorian London world provides the correctly Whovian element. I was actually going to say it jars, but I think it has to be this way to make it a Doctor Who. 'I haven't been in China for 400 years...'
This adventure is almost a gleeful parody of the British detective genre. The Doctor just knows that the Tongue of the Black Scorpion is at work. Then the stooge, Jago, after commenting on the newspapers' theories, finds that Chang's 'dummy' has blood on its hands. I say parody because it is so overdone that if you watch this adventure hoping for a straight mystery, you'll be disappointed. I think it is probably best approached as an atmospheric showcase for The Doctor. This episode also does a good job at raising the necessary questions:
What's with Chang's dummy?
Is Chang Chinese?
Will one of the real Chinese people feed Chang to the rats?
How do the criminals of Victorian London instantly recognise Doctor Who as their nemesis?
Who's been feeding the rats?
Will Jago get eaten?
Where did Leela achieve such mastery of English (far better than Chang's)?
Why have the police taken The Doctor into their confidence rather than arresting him?
Will the police fall into the trap of rather obviously arresting all the Chinese & theatricals in the piece as dodgy characters, leaving The Doctor to be eaten by the rats?
Why haven't the rats got stuck in the Victorian sewers?
*Ten feet*????
------------------
70s TV Doctor Who