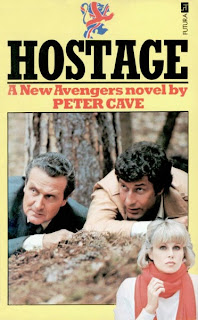 I very nearly got distracted from my current orgy of New Avengers postings by the arrival of the box set of Man in a Suitcase. However I'm clearly going to have to internalise that series somewhat before I can post on it, especially as it seems to be the most neglected of sixties TV series. Instead, back to a very Avengers episode of the New Avengers, & the point at which I became convinced it was classic Avengers was the lines:
'Spellman...Where does he live?'
'North London...You won't believe it...It looks like a funfair.'
Not a favourite of the fans, this one, but I find it interesting because of several elements. Quite a lot of the inner workings of the Avengers' organisation is exposed to view, & as in other Avengers episodes where that happens, is shown up to have really fairly lax security. I assume the Purdey-tied-up motif was meant to be kinky at the time; her (to them) absence shows what she actually means to Steed & Gambit. Naturally Gambit is the one for whom the meeting with mother is posited, but Steed is quite plainly at his wits's end.
Visually this one works very well. I like the long corridor arrangement of the Ministry - even the seventies carpet tiles! The villains' setting can't be faulted for Avengers weirdness (it's comparable to the puppet shop in The £50,000 Breakfast). This is clearly intended to be totally differentiated from the wood panelling of Tommy's office at the Ministry, a very Avengers differentiation of the upper classes as the good guys & the lower orders as the criminals. The two groups are even clearly differentiated in appearance - witness the proliferation of facial hair in some very seventies styles versus the completely clean-shaven Ministry agents. All of this prevents this episode from becoming merely a routine espionage show, which it would be without the Avengers episodes. This one has genuine suspense & fear - the setting where Purdey's hair is cut, a coffin, creates real suspense & fear. This is even more clever when there isn't really that much of a point to Purdey's abduction, beyond showing it can be done. It also pushes Steed into a position where he has to break the rules - his line to Gambit at the beginning of the episode about which rules to break & which never actually indicates Steed's principle here. I agree with the view of 'Terylene' (http://theavengers.tv/forever/newave-23vr.htm) that while Steed may sometimes *appear* to play fast & loose with his loyalties, actually it is always to the end of catching the enemy that he does this. Steed's principle that the end - of loyalty to Queen & country - justifies the means, even if it sometimes appears like he's being a traitor. Here suspicion is cast on him, but he is actually the hub of the organisation, which couldn't carry on without him if he were to resign. Once again, a very badly planned security organisation, if it is so dependent on one operative. However the central philosophical concern of this show remains around loyalty, trust, & their opposites. This show does a good job of making the characters' trust keep changing sides, even at one point the abductors losing their 'trust' in Steed. In a context where there is doubtless treachery, the point here is to rely on what you know to be secure.
Shortcomings this episode has a-plenty. It *is* rather slow for one. It managed to lose my interest around twenty minutes in. Too much is made of the central plot theme of abduction & loyalty - Gambit's fancying Purdey or the visual interest of the funfair setting is not enough to lift it out of its rut. Interestingly it is at just about this point (where I lost interest) a car chase is inserted: the thing that is wrong with it is that surely it should be well-nigh impossible to shadow an agent of Steed's calibre at all!
In the course of writing this I have discovered it was one of the New Avengers novelisations that I had completely forgotten about. I tried some once but didn't get on well with them - perhaps now I'm more into the New Avengers I'll give them another go.
Not at all a bad stab at a classic Avengers story, this, let down by plot failings though.
------------------
70s TV The New Avengers