Danger Man: The Battle of the Cameras 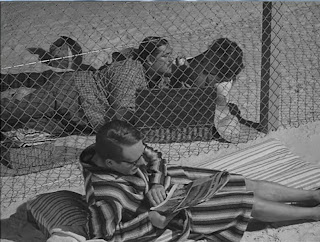 You'll notice I've side-stepped Colony Three. I will probably write about it at some point, but at this point I want to write about Danger Man as Danger Man, despite the unavoidable Prisoner overtones, caused in large part by my coming to that series first, & also my explicitly writing about Number 6 as John Drake. At some point I will also write about The Prisoner coming from a different viewpoint. Also, this is not a systematic commentary on Danger Man - I'm feeling free to select the episodes I like. The Battle of the Cameras feels quite different, for me, from the episodes where Drake is more-or-less obviously winding up (or being wound up) to resigning. It feels lighter, less spy-like. Perhaps it draws more on the sixties milieu of fascination with all things foreign, just then being opened up affordably to the unwashed masses. This Danger Man - perhaps, I watched them avidly as a child but have found them impossible to watch as an adult - feels more like a Saint?
Let this Danger Man also stand as the evidence that I don't *always* dislike familiar faces, in this case Patrick Newell, in a quite different role from Mother. He is plainly only ever going to be Patrick Newell & doesn't irritate me at all! I like Newell in a subordinate, almost buffoon, role: it shows the breadth of his acting ability that he can do that kind of role as well as Mother. Drake's role in this one again evokes the way the spy segues into the actor: he actually plays several different roles under the guise of the same character, in this episode.
This one also evinces surprisingly modern concerns - the cameras of the title refer to a pitched media battle between Drake & the opposition. That said, despite displaying some of the mechanics of the spying game, I remain adamant that this Danger Man isn't really about spying. This Danger Man could be watched purely as a insight into the lives of the idle globe-trotting rich of the sixties. I realise that that would be to miss out much of the plot, but this still strikes me as an episode that changes the balance slightly towards the atmosphere-driven, rather than the plot-driven drama. Not that there's anything wrong with the plot: it's a straightforward spy drama. Perhaps this atmospheric bias is what makes me keep thinking of The Avengers, even though superficially it's nothing like any era of The Avengers - it's the time taken to swill champagne in exotic locales. I suppose the natural successor of this type of drama would probably be Jason King, so Drake-as-playboy allows a new insight into what he was capable of. In fact for the whole hour of this show Drake is hardly tortured or angry at all!
In fact - I'm halfway through my successive viewing of this show - a suspicion is dawning on me that it is not coincidental that this one was chosen to kick off the renewed Danger Man series in the US, after the first series bombed. This would be a good choice, post-Bond, because it draws on so many Bond elements which are normally played quite differently in Danger Man. *Normally* Drake would distance himself from a femme fatale & approach the problem differently. Here, Drake gets to be about as Bond as he ever does.
I have a further suspicion - there is an element of parody in this show. I think that's why it feels so much like an Avengers to me. If it was intended to be parody it is (rightly) played so deadpan that parody can only ever be a suspicion.
Visually it's superb. While not obviously shot on location, establishing shots are used to very good effect, so this one succeeds where Yesterday's Enemies failed. A possible criticism is the abruptness & counter-climactic nature of the ending, but I don't personally have a beef with that, preferring not to take this episode as a 'straight' spy story.
So all in all, an excellent, if slightly different, Danger Man. It shows signs of the new series getting into its stride in terms of visuals. Perhaps slightly risky to broadcast as the first of an otherwise very different series, though.
------------------
60s jobbing actors 60s TV Danger Man ITC