Virtual Murder: Last Train to Hell and Back 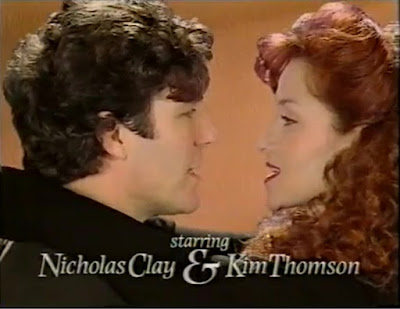 After writing some posts about documentaries I was absolutely gagging to scurry away to unreality, and so here we have an episode of the 1992 series, Virtual Murder. Honestly, I'll be surprised if even the readers of this blog have ever heard of this show because nobody ever has. Virtual Murder was intended to be in the mould of earlier eccentric series (The Avengers, Adam Adamant and Department S are often mentioned  - are you interested yet?) and was about two amateur detectives who investigated odd cases in tandem with the constabulary. It's got some names in it: Nicholas Clay plays John Cornelius, Kim Thomas plays Samantha Valentine, and Stephen Yardley plays Inspector Cadogan. It incorporates elements of the occult and virtual reality, and so brought the eccentric sixties TV show up to date for the nineties. All of the episdoes are available on youtube.

You may not have heard of it because it's had a critical pummeling and there is vanishingly little about it even in the cult TV blogosphere. The problem with making a show which everyone will link with legendary sixties TV is that you get compared to shows like The Avengers. Gulp. It's like saying that I am a very handsome man, but I still wouldn't look that good compared to Nicholas Clay, and it's a comparison which really isn't fair. Hence the critical drubbing. It also didn't draw the viewers in huge numbers when originally broadcast, but I haven't been able to find out the public's reason for that.

It has an extra interest for me personally because it was made at Pebble Mill and location filming took place in Birmingham, Wolverhampton and Kidderminster, notably the Severn Valley Railway. You'd noticed, hadn't you that old railways in TV and film always look the same, hadn't you - it's because they're mostly made on the SVR.

I have chosen this episode to start with (although knowing me there is no guarantee that I will blog about the whole series) because it features a railway. It is also very reminiscent of the plot of the Spyder's Web episode The Executioners, and even of Agatha Christie's And Then There Were None - it's the plot device of the member of the great and the good who goes off the rails and starts administering his own ideas of justice. In this case it's a Judge Rawcliffe who is suspected of the murder of a psychologist who was looking into the death of the judge's last wife. He has some very right wing ideas, including a great love of the death penalty and treating his daughter as a slave, right up to carrying out his own 'justice' system in his own house. If this all sounds much more familiar from TV, this is basically the plot of every Avengers episode ever and I'm so delighted to be telling you about it.

The streak of psychology which runs through the show is also not unknown from sixties TV and here includes parts of an actual psychological assessment on the judge. I don't think it's an actual psychological assessment, rather a dramatist's idea of what it would be like but it's fascinating in showing the judge's reaction to being assessed: he literally doesn't take it seriously at all. Cornelius comments that he's probably psychopathic and actually this show is one of the best depictions of frank psychopathy I have seen in my life.

I suspect that how we would view this now would be different to when it was made in the early nineties. It has become much more apparent from the headlines that many people professing strong morals and telling other people to follow them, have a tendency not to live them themselves, that's why they hold them so strongly. Personally I wouldn't trust Judge Rawcliffe to run a bath. This is because the show reflects the conflict between tradition and modernity which features in so much sixties TV (and copies The Avengers in depicting tradition as rotten and modernity as being the way forward). I'm probably one of the people the judge would want to hang without question but I just think that if you've got a fake court (behind a hidden panel) in your house and like to listen to criminals begging for mercy, you're kinky and just plain getting off on it. The twist at the end comes as a bit of a shock, I don't mind telling you.

The connection of the railway is that the psychologist investigating the judge's wife's death was killed at the preserved railway. There is also excellent use of a miniature railway. In true Avengers style when Cornelius and Valentine fall into a clinch at the end, the train represents, well, you know what. There are sexual undertones to the show but they are always very minimal, barely noticeable, and probably in my own depraved mind.

If ever there was a show which wanted a commercial release it was this one. The show is visually excellent and it's annoying to have to watch it in VHS quality in downloaded off youtube (in case they vanish) copies. While I gather that critical opinion has always been mixed at best I personally don't have a criticism of this show, I love its use of all the key themes of sixties TV transplanted into the early nineties.

This is an excellent show which deserves to be much better known.