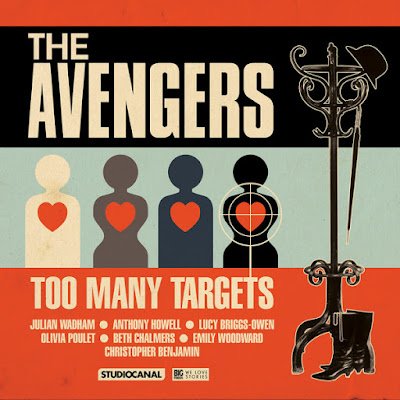 Whenever I think the Avengers well has run dry another story comes out. My only sorrow is that this is another'non-canonical' one, but am still delighted that Big Finish have made an audio adventure of the novel called Too Many Targets.

Two agents are dead, and their murderers sound worryingly familiar. A killer gorilla is on the loose, a deadly disease is ravaging a distant country and an eminent doctor has been kidnapped. It's all pretty much business as usual.
But when John Steed is called in by his old boss and given an appalling task to complete, at the same time as Tara is given one that's even worse, it becomes clear that the myriad threads of a terrifying scheme are drawing together. The fate of the world hangs in the balance.
Steed won't be able to handle this case alone.
The Avengers are needed. All of them. Source, where you can buy the adventure. 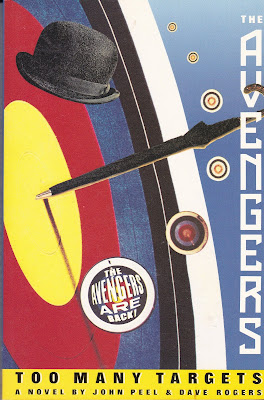 It is based on a 1990s novel (which you can buy here), which I have read and remember liking for its authentic Avengers feel. In fact the only criticism I think people might have is  the obvious one of all the Avengers being present at once! So I think the fans will either love it or hate it. It is one of the more recent novels. I have read some but not all of the earlier ones and remember them fondly and you can read about them here. Of course since then the internet has provided a platform to anyone who wants to write an Avengers-themed piece. Some are very good. Regular readers will not be surprised to know that I'm not taken with attempts to get Steed off with Mrs Peel. I am very much looking forward to listening to Too Many Targets, though.
Posted by John No comments: Links to this post 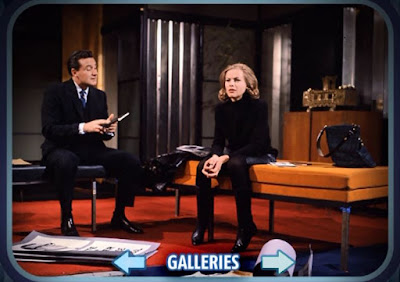 My last couple of posts featuring Avengers episodes with Mrs Gale well I'm the blogosphere so here's another one.
I realised that I have rather avoided writing about this episodes, and there are two reasons. The first is that the title is all wrong. What is clearly written November Five, but we don't say that, we say November the 5th, which is of course a monumental day in British history and particularly in the history of Parliament.
Remember remember the 5th of November,
Gunpowder fire and plot.
I don't know whether this date would be pronounced November 5 in American English, but I don't think this season was exported to the States, so even if it was that wouldn't be a reason for the transatlantic usage.
The other reason I have rather avoided it has been amplified by my reading round the episodes on the internet before starting to write. It is that I personally find politics intensely dreary.
I'm not the worst off as far as that goes with this episode though, and reading round it on the internet have realised that our parliamentary system is almost completely opaque to everyone else. So let me let you into a secret: We don't understand our politics or law either.
Suffice to say that Dyter is standing as one of the members of Parliament. Of the 2 house. He is standing for the House of Commons, because he is a commoner and not a Lord. Any citizen can stand for the House of Commons, to represent one of the 260 constituencies. You don't even have to have the backing of one of the political parties. If you can find 10 residents of the constituency to nominate you, and the sum of £500 which is Returned if you get over 10% of the vote anyway, you can stand for Parliament. That is why steed can sneak Cathy in, and also why he offers to pay her deposit because she obviously will have to pull out. Older readers may remember Screaming Lord Sutch, who must have lost thousands and thousands of pounds in deposits getting people to stand for Parliament who were never going to get many votes. 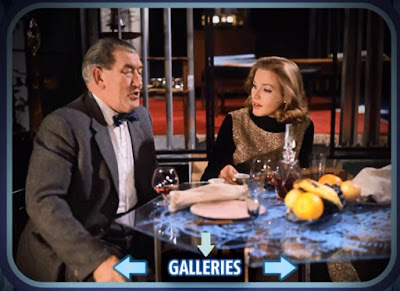 In fact the politics is one of this episodes major downfalls, it tends to make it turgid and over talkative, well as incomprehensible to non British viewers. There is an excellent review summarising the political and class matters covered in this episode here.
The other shortcoming of this episode is the plot, which is overly complicated, involving sea about a gym, a warhead, and an election! If you don't watch carefully it is very easy to get these confused. Additionally if you are not aware of the class differences referenced by accent and political party, subtle layers of meaning pass you by.
The absolute highpoint for me is the point at which Mrs Gale announces that she is going to for the seat. Of course she is wearing all leather to make this announcement, and that is an outfit that would be considered kinky for the role even now!
But what made me want to write about this episodes in the first place that I was looking at Mrs gales flat while I was watching the last episodes I reviewed, and thinking how uncomfortable it is. There is a post about the flat here. I have not watched Through the previous episodes to get screen captures off the previous flat she lives in, and strangely there don't seem to be any on the internet, but I seem to remember she lived in a rather ordinary flat with floral wallpaper and the only difficulty she had was finding space for all her heads! What is the height of modernity. Unfortunately that also means it is harsh, and the only apparently comfortable seat in the place is which hangs from the ceiling. It's always pictured it in shades of grey or blue, being intended of course only for black and white photography, but I'm delighted to see from the color pictures included on the disc, that it was actually orange, although that may have made it even less restful! Personally I prefer all of Steed's flats, the first for preference.
Incidentally I find the gym in this episodes to be very visually effective, since it looks more like a dry ski slope than anything else.
Posted by John 4 comments: Links to this post 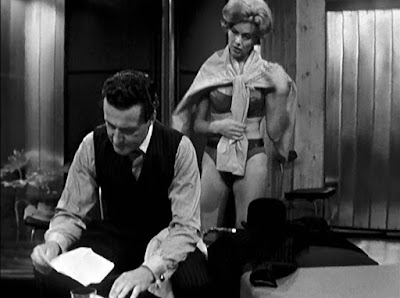 I can no longer put off writing about this episode, because a recent post in which I commented on Mrs gales underwear was very popular indeed, and I can only say that I must have managed to miss the shot seen in which Mrs Gale is in her underwear in this episode! This will however be an equal opportunities underwear episode.
Actually in all seriousness in wanting to write about this episode but have been putting it off because I didn't want to sound uncritical, so I've had a good heart think and will post what I suppose is the obvious criticism of this episode.
You see the trouble is that I actually think it is superb! Regular readers will know that I am not usually slow to criticise these shows, but this Avengers episodes somehow manages to be visually superb, genuinely mystifying, have great actors, and only suffer from the slight shortcoming that the plot is about as implausible as you could wish to get!
Come to think of it perhaps that isn't really a short coming in an Avengers episode, perhaps it is merely a foresight art what is coming later in the series. Nonetheless if you are watching this as a more mainstream espionage show you do genuinely have to suspend disbelief, to accept the plot of complete doubles of people. This class device is also used elsewhere in the show, but in a series 3 episode can seem somewhat futuristic. 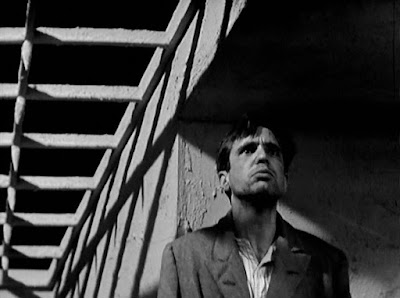 The actors rightly play it completely straight faced, which must have required some discipline. The character of Borowski, who has been brainwashed and given several different personalities - this drawing on the source of fear of psychology which was popular at the time, and which we see later expressed in The Prisoner - particularly effective. I suppose that steed is exactly the sort of person who would have ended up in the village if he had failed to cooperate with his master's, and we see clearly in this episode that he is completely disposable to them. If there is the slightest doubt that he is not the real thing then he must be killed. The underlying fear in this episode is one which recurs in the television of this time, human life was made cheat by technology, in this case the technology which could reproduce people and give people different personalities.
Visually the episode is also excellent, and the effective scenes of Mrs gales apartment and the interrogation room are with the more pedestrian scenes in the holiday camp. The episode therefore rightly depicts the ropiness of many of the holiday camps of this time.
There are some familiar faces among the actors, but not jarringly so in my humble opinion. 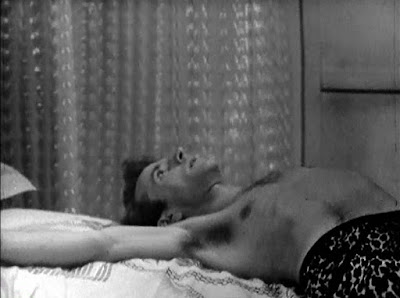 A further criticism I have that this episode is perhaps the one which makes most explicit possibility that Mrs Gail and Steed are an item, at least the opposition thinks they are, which isn't an unnatural conclusion to jump to, their behaviour together also suggests this possibility. Regular readers will know that I prefer the theory that there was a sexual tension between steed and his partners, but that's nothing actually happened. To me steed is the consummate professional, and in the nature of things would have remained aware of any sexual dynamic not actually crossed over into a relationship.
Despite this, this episode is rather sexy. Mrs Gail is not ashamed to have Steed see her in her underwear, and I suspect that it would have been considered quite racy underwear at the time! We see from Steed's expression that he is clearly appreciative of this, but it is not usual between them, so either Mrs Gale is painted as the uninhibited one, or possibly Steed is a bit of a prude. This is exactly the sort of situation which has giving rise to so much discussion over the years. Incidentally the underpants we see in the opening scene a man being shot by himself, seem to be the long-defunct X-Fronts made by a company called Wolsey in Direct competition with the more familiar y-fronts (and in what looks like a very fetching leopard pattern as well)! I wonder if they considered z fronts or w fronts as possibilities...
Besides we also see indications of what Steed would later become. Despite being painted as the total professional, in this episode as in later episodes, when challenged to prove that he is who he says he is, he becomes flippant and completely fails to come up with the goods. This is a bit different from the earliest Steed, who is a rather dodgy character who just appears out of nowhere now and then, and has much more in common with the flamboyant Playboy of later years.
My personal conclusion about this one is that it's over-complicated: there is a part in the middle where you lose touch of who anybody is and everybody wants everybody else dead! It is only after writing this I have listened to the DVD commentary in which Jas Wiseman comments that this episode may have been influential on The Prisoner, and I'm very chuffed that I also thought of that!
Posted by John No comments: Links to this post