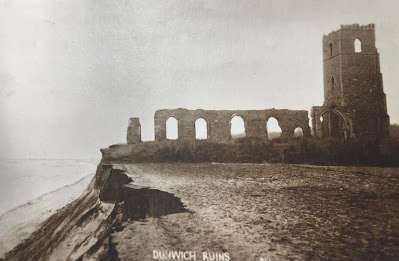 The Drowned Town is an episode of the long-running series about archaeology, Time Team. It's about one of my favourite places, the mystical town of Dunwich, Britain's Atlantis. In mediaeval times it was a port which rivalled London, with several churches, even a cathedral, until two storms in the fourteenth century caused the majority of it to vanish into the sea. Coastal erosion has continued since then and there's a whole history which continues to crumble and collapse.

The reality is that the remaining few dozen homes which currently constitute the village of Dunwich will also vanish into the sea within the next century, and this is the setting for this episode of Time Team. They comment, rightly that it's an archaeologist's and historian's nightmare because it won't be there and this is about as at risk as heritage can get. The premise the team set themselves is to prove whether or not Dunwich was also an Anglo-Saxon settlement before the mediaeval period.

It follows the standard Time Team format of describing the findings of standard archaeological techniques, traditional and modern. It is a format which has made this show last for yonks and yonks and is obviously successful! Some episodes of the show are even used in university courses. It is evident that Dunwich is relatively little analysed and it isn't already clear what even mediaeval Dunwich was like, so much of what they are doing is new.

But Dunwich is different to what they usually do and that's what makes this one stand out. The show rightly draws on the lucky chance that some parts of Dunwich have disappeared since the invention of photography and we get to see a sequence of photographs as the mediaeval All Saints church (the last of Dunwich's numerous churches - presumably it doesn't have one any more and nobody in their right mind would erect anything more than a Portakabin there at this point) gradually vanishes.

And then we have my favourite bit, which is the imaging they do of the sheer volume of rubble which is under the sea. Honestly it's worth seeing the show just for that bit. I don't have any criticism of this show, although honestly you'd have to be a real dunce to make a show about Dunwich which doesn't capture the strange magic of the place.

I won't tell you whether they prove there was an Anglo-Saxon Dunwich, because I want you to go and watch this show, obviously.