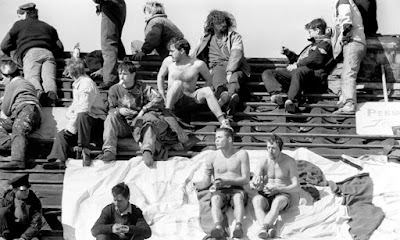 This is a documentary about the 25 day riot and rooftop protest at Strangeways prison in Manchester in April 1990. It is the 2015 documentary here.

This one primarily uses a deceptively powerful technique about this technique of some narration but mainly depending on interviews with the prisoners, officers and even the chaplain in the middle of whose sermon the riot kicked off. Sounds perfectly simple doesn't it, and certainly doesn't sound powerful.

But it's the juxtaposition of the different interviews which is what makes it powerful. Seriously this is some powerful documentary making. What I mean by this is the way you see the screws saying there was no abuse of the prisoners going on. You then immediately see several different prisoners describing clear abuse of the prisoners. And not even just that. You then see the then new reforming governor also describing clear misconduct such as officers wearing racist badges and going out drinking in the officers' club at midday and then going back to work. He describes clearly that the officers did not behave as they should.

This technique literally pulls no punches and particularly distressing parts are where they describe having the keys to the whole prison (What is wrong with this picture? Even as psychiatric nurse I know that nobody should have the keys to the entire place just in case you lose some of them for whatever reason) and describing them administering traditional prison punishment to the 'not of normal criminal element' prisoners.

There are three other techniques used: one of the recordings from relatives to the rioters to inmates begging them to give up, which is of course very powerful in itself. Another is that some footage is used from previous documentaries about Strangeways, because the cameras had been in repeatedly in the previous decade and we see clear predictions that this was going to happen. Finally, a minor element is use of the TV news footage from the time, which of course was necessarily based from outside when nobody knew what was necessarily going on inside and so we see the familiar scenes of the prisoners on the roof communicating to the press with megaphones and banners. I think the mixture of techniques here is absolutely perfect and this documentary is absolutely stunning and an emotional roller coaster in places.

For me personally what comes across loud and clear from this documentary is the culture of the prison. One of the officers actually commented that in 1990 they would be officers who had been trained by officers trained after World War 2, trained by those trained after World War 1, and right back to the Boer war. The culture of the prison actually hadn't changed, and it is abundantly clear to me that the officers didn't have any idea of how to treat the prisoners. For example the screws were shouting death threats at the ones remaining on the roof at one point and how they were critical of a negotiation process which started. If you run a prison and the officers' only strategy is to escalate things and they have no conception of de-escalation you deserve everything you get.

I don't have any criticism of this documentary: it's like a hammer blow and I can't think of how it could have been improved. When Manchester prison was re-opened in 1994 a prisoner told visiting journalists that the improved conditions were result of the riot and the prison service would otherwise have done nothing.

The most striking and telling moment in the documentary is where one of the officers is talking about the governor at the time and saying that if a prisoner wanted to talk to him he would just stop and talk to the prisoner. He thought that was strange.

And that just about tells you all you need to know, doesn't it?

Finally if you don't want to see documentaries there's also a new soap opera to watch: