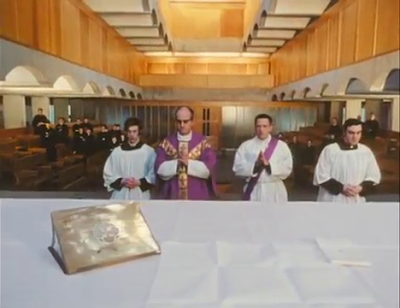 So far I've been good and stuck to my self-imposed rule of doing TV documentaries for this series of posts, but y'all knew I would never stick to that. And so here we have Murray Grigor's 1972 16mm film called Space and Light, about Cardross Seminary, just outside Glasgow. It's available to be seen on youtube  here.

You may wonder what makes me think it's documentary enough to be included here, because it's rather unusual. In fact the more unusual features are what I think make it an absolute masterpiece of documentary. It is short, for a start, just over twenty minutes. Not one word of dialogue or interview is spoken, the only sounds you hear are music specially composed for it based on the Veni Creator Spiritus sequence for Pentecost and odd snatches of what is happening in the scenes shown. Instead what you get is the visuals alone with no description of any sort.

And it's glorious. Absolutely glorious. The seminary is a sort of architect's wet dream, opened in 1966 to train RC priests for Scotland. It was designed by member of Gillespie, Kidd and Coia, a sort of Catholic 'mafia' firm of architects for the archdiocese of Glasgow who designed loads of churches around there for them. They started off with an old house and build this outrageous concrete brutalist monstrosity around it in the middle of a wood, and there was no way this building was never going to achieve posterity.

Space and Light perfectly shows why. Literally all you see is daily life in the seminary. We see mass taking place in the chapel, with the clergy and servers processing up the ramp from the underground vestry with attached chapels. We see the seminarians walking round the building in clumps (almost in procession) from one event from another, for example from refectory to church or the other way round). We see them relaxing and playing games with each other, and reading in the library. We see the outside of the building. What this documentary does, superlatively, is exactly show us how the space works as intended. It also shows fascinating architectural vistas and, as you'd expect, the play of light. This film is a modernist architect's fantasy come true.

And yet as a documentary it actually reveals much more than what the building is like and what daily life in a seminary looks like, if you've got a questioning mind. This is what makes it such a good documentary because it only SHOWS you and the viewer has to wonder and ask the questions; it gives literally no answers or even suggestions for the questions you would have to ask.

The sort of thing I mean is this: you would expect to see lots of young men in cassocks in a Roman Catholic seminary and of course you do. But we also get to see that there was a convent of sisters attached who lived completely separate. You never see them together with the seminarians. The only time we see the seminarians contact a woman at all is when they take the food from the women who work in the kitchen. Space and Light, despite being a showcase for a modernist architectural masterpiece, is also a very clear statement of the traditional division of the sexes in the seminary, and it's a very clear upstairs/downstairs division. In the light of subsequent church history you have to wonder that it can only be dangerous to provide an environment where contact with other people is constrained to a single sex or a single 'caste'. At the least you'd be in danger of crippling shyness or thinking you're extra special.

I'm honestly surprised at how much this purely film documentary technique gives away. One of the other things it gives away is that it gives the lie to part of the narrative about this seminary and its subsequent decline (it was eventually literally given away by the archdiocese to a charity after the Scottish government refused to take it into state control). This is the account that you read everywhere that the seminary was commissioned based on a model of training priests outside of the community and then in the sixties the model changed to training them in the community. The seminary model dating from the Counter Reformation is basically intact: I know because we've got an actual seminary right here in Birmingham and that's been going for decades longer than Cardross did. It just isn't true that the way of training priests changed. In Space and Light you see the truth: in the scene from mass (above) the church is clearly half empty. The scenes in the refectory also show it half empty and the lecture theatre scenes show enough room for the seminarians to stretch out in alternate seats. This was only filmed six years after it was built so the reality is the seminary as built was never needed and is the result of overambition. Obviously you don't see them in a sort of architectural skin flick like this but the tales you can read of how the building was a nightmare to run combined with this overambition are the obvious reason for its demise. As well as the way it leaked like a sieve and could never be heated properly, my favourite is the one where the light bulbs were special ones imported from Denmark which couldn't easily be bought, so as the bulbs started to go, the seminarians would keep hold of their own light bulb which they would carry around with them and just screw it in where they were. Which is asbolutely barmy.

I don't have a criticism of this film. I just think you should go and watch it at once.

Oh alright, I know you want a more recent picture of the scene above... 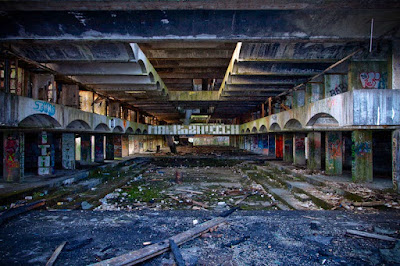